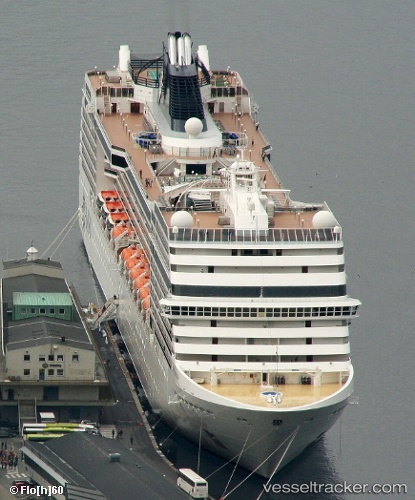 In the afternoon of Feb 20, 2019, the "MSC Orchestra" allided with the "MSC Poesia" at the Benito Quinquela Martín at the port of Buenos Aires. The "MSC Orchestra" left the port bound to the final destination of the cruise which was Rio de Janeiro after a previous stopover in Montevideo. However, for causes that were under investigation by the Argentine Naval Prefecture, it scraped the port side of the "MSC Poesía", which had moored the same day, with it starboard side. While the damage was minor, the accident caused concern among the passengers of both ships. The "MSC Poesia" suffered damage to a mooring bridge that protruded from the hull. Also the pier was damaged and a fender torn off shoreside. The "MSC Orchestra" which suffered damage to a lifeboat on deck 7 left the port at 10.40 p.m., bound to Punta dell Este. The "MSC Poesia" left the Terminal Rio de Plata S.A. on Feb 21 at 9.30 p.m. and headed to Montevideo, ETA Feb 22, 9.30 a.m. Spanish reports with photos and video: https://www.lanacion.com.ar/2222327-chocaron-dos-cruceros-puerto-buenos-aires https://www.infobae.com/sociedad/2019/02/21/chocaron-dos-buques-de-pasajeros-en-en-el-puerto-de-buenos-aires/ https://www.youtube.com/watch?time_continue=4&v=RhZv2jkR7O0 https://www.youtube.com/watch?v=XEtcnLEX45c https://www.facebook.com/watch/?v=1052655061611758

A passenger aboard the "MSC Poeasia" got injured onboard a cruise ship while it was sailing in the Gulf of Naples and almost lost his finger. The cruise pship was sailing a 7-night mediterranean cruise which departed Palma de Mallorca on Aug 4, 2016. The finger was partially detached and needed urgent medical attention on land. Authorities dispatched the patrol boat "Cp 890" which took the man to the hospital Vecchio Pellegrini of Naples. A medical staff member also accompanied the man to the hospital where doctors hoped to attach the finger.

While the "MSC Poesia" broke off its moorings in the afternoon of June 15 at the Ostsee Quay in Kiel the gangway over which passengers were boarding the cruise ship could be evacuated in time before all seven stern ropes had gone and the ship pulled away, The "MSC Poesia" fortunately had some engines running so the captain could still react while the storm front was pushing his ship perpendicular to the basin and get it back using the own propellers and thrusters. There was no damage to the ship. The water police launched an investigation of the broken ropes which were meanwhile replaced but found no deficiencies. The ship was allowed to proceed to Copenhagen and sailed at 6 p.m. German report with photo: http://www.kn-online.de/Schleswig-Holstein/Aus-dem-Land/Gewitterfront-fegte-ueber-den-Norden