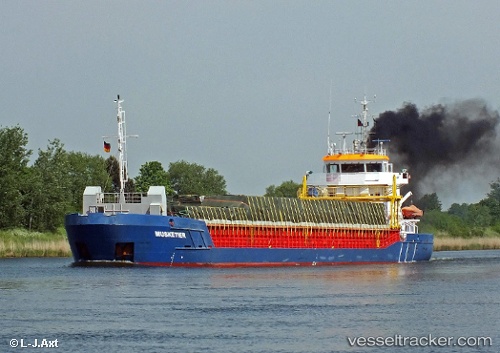 The "Msuketier" has been sold to Vicomte Maritime Services in Guernsey, no name Change.

MRCC Calais late at night Aug 6 spotted freighter in English Canal, which stranded off traffic zone and was heading towards French coast in a reckless manner, not answering VHF calls. It was general cargo vessel Musketier en route from S-Petersburg to Bermeo in Spain, with full cargo of steel. MRCC contacted Navy, which sent a helicopter to wake up the crew. Helicopter hovering above didn’t succeed, either, so a member of the helicopter team was lowered down on freighter’s deck. Finally, crew and Captain woke up, and corrected the wrong course. MRCC sent to freighter tug Abeille Languedoc (IMO 7710525) with 5 gendarmes on board, to make sure crew won’t change their minds and go to bed again.