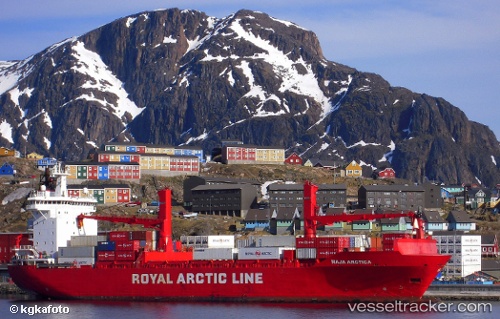 On May 26 2019, at 8 a.m. the "Naja Arctica", coming from Aalborg, allided with the Kleppsbakki wharf in Sundahöfn port, Reykjavík, which was severely damaged. Instead of making a turn, as it was meant to do, the vessel sailed straight into the wharf, tearing it and rupturing its steel wall with its prow. The damage was estimated to be dozens of millions of Icelandic Crowns to repair. Steel and other material for the repair will have to be purchased from abroad.The cause of the accident was unknown. Police officers took a statement from the ship’s crew, before they left for Nuuk, Greenland, at 6.15 p.m. One of the two berths of the wharf won’t be usable for at least a month. Report with photos: https://icelandmonitor.mbl.is/news/news/2019/05/27/ship_sails_into_kleppsbakki_wharf/

Malfunctioning crane to be removed

Technical problems with one crane aboard the "Naja Arctica" will cause delays or cancellation of port calls in the forthcoming weeks. The ship will be forced to extend its stay in Aalborg, where the crane will be removed after the arrival from Reykjavik on July 22, so that it can be repaired. The lack of the crane meant a reduced capacity of the ship when it sails from Denmark to Greenland and longer turnaround times in Greenland where the ship can only load and unload with one crane. In Nuuk, the ship will get assistance of the "Irena Arctica" for loading and unloading. Royal Arctic Line thus decided to cancel the call at Reykjavik on July 26, so the next call will be by the "Nuka Arctica" on Aug 2.

In the morning of Feb 27, 2015, a fire broke out aboard the "Naja Arctica" in the Greenland Port of Aalborg. The fire broke out in a space next to the main machine. The ship's crew had partially extinguished the fire when the fire brigade arrived. Thanks to the quick action of the ship's crew damage was limited. One crew member was taken to hospital for smoke inhalation. The "Naja Arctica" was due to sail from Aalborg on Mar 11 with a call in Reykjavik on Mar 15 before heading on towards Greenland. It was expected that the fire would affect the timetable.