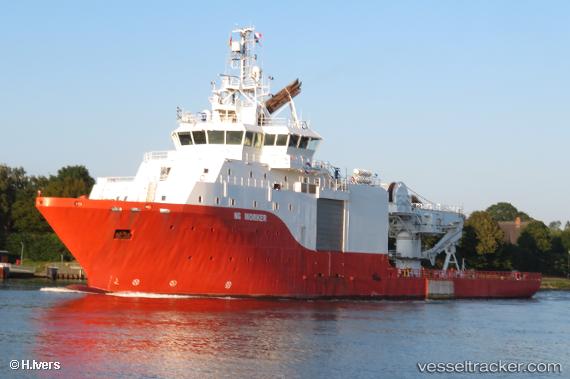 In the afternoon of Apr 19, 2015, the 35-ft-f/v "Stortinn Junior" which was wrecked off Røst on Apr 6 was raised from a depth of 61 meters by the "Seabed Worker". At 3 p.m. it was lifted on board the ship. The body of skipper who had been missing since the accident was found in the wreckage. The deceased was to be transported to Bodø for identification and an autopsy.The "Seabed Worker" started on Apr 16 in the afternoon its effort to recover the "Stortinn Jr.". In the morning of Apr 10 the "Stortinn Jr." was located on the bottom. Crime technicians of the police will carry out a technical examination of the boat along with personnel from the State's casualty commission. One man had survived the shipwreck. The 19-year-old grandson of the deceased sat on the bow of the boat when a rescue boat arrived. Norwegian report with photos: http://www.nrk.no/nordland/rost-sjarken-hevet-sondag-ettermiddag-1.12317574

On Aug 18, 2013, the "Seabed Worker" returned to Bergen after 90-day charter of the vessel for 2013 North Atlantic operations of the Odysssey Inc. has been completed with outstanding results for the company. The Odyssey team achieved a record recovery of 1.8 million troy ounces of silver from nearly three miles deep, bringing the total silver recovered from the "Gairsoppa" shipwreck to more than 3.2 million troy ounces. The "Gairsoppa" project was followed by unprecedented work on the more complicated structure of the "Mantola", using a newly developed precision cutting tool commissioned by Odyssey to gain entry into a storeroom on the fifth deck, down to where the silver was believed to be located. Although hey were able to gain access to the target area and clear some of the other materials during this rotation extending the charter to complete clearing of this area did not make business sense given the current price of silver and the cost of continuing the charter. Odyssey was, however, planning to return to the "Mantola" in the future with upgraded versions of some of the technology they developed during this expedition. Odyssey may return to the "Gairsoppa" site as researchers onshore continue painstaking research of records to corroborate existing documents that suggest additional uninsured silver may still be onboard the cargo ship.

A US marine salvage firm says it now has recovered virtually all of the silver bullion carried in a British cargo ship that was sunk by a German U-boat off Ireland in World War II. In a statement Tuesday on its website, Odyssey Marine Exploration said it had pulled up 1,574 silver ingots from the SS Gairsoppa this year, or 61 tons. That is in addition to 1,218 ingots recovered last year. Under a contract with Britain's Department of Transport, publicly listed Odyssey will retain 80 percent of the net salved value of the cargo. The Gairsoppa, loaded with silver, pig iron and tea, was en route to England from India when it was sunk by a German U-boat in Feburary 1941. Most of its crew was lost. "This was an extremely complex recovery which was complicated by the sheer size and structure of the SS Gairsoppa as well as its depth nearly three miles (4,800 meters) below the surface of the North Atlantic," said Greg Stemm, Odyssey's chief executive officer. Despite indications from Lloyd's record of war losses and other sources, Odyssey said it found no sign of any additional uninsured silver on the vessel. With no more silver to be found inside the Gairsoppa, Odyssey said its salvage vessel Seabed Worker would focus its efforts on the SS Mantola, another British ship, lost in 1917 with a reported 600,000 troy ounces of insured silver on board.