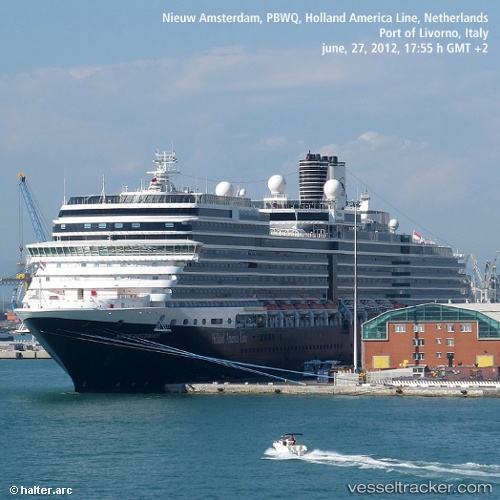 The US Coast Guard medevaced a 68-year-old man from the 'Nieuw Amsterdam' approximately 12 nautical miles south of Hinchinbrook, Alaska, on Sep 3, 2022. Watchstanders from the Coast Guard Sector Anchorage command center received a report at approximately 10:51 a.m. from the cruise ship that the passenger was experiencing abdominal pain. A Coast Guard Air Station Kodiak MH-60 Jayhawk helicopter aircrew arrived on scene at approximately 1:09 p.m., hoisted the patient and staff nurse, and transported them to awaiting EMS in Whittier, Alaska.

Recovery of plane wreckage on the hold

The efforts to recover the wreckage of a sightseeing plane that crashed in Southeast Alaska killing six people, among them five passengers of the 'Nieuw Amserdam', remained on hold on Aug 9 as investigators awaited a break in the poor weather conditions. Low clouds and fog continued to delay wreckage recovery efforts. The wreckage is in a rugged, steep area that is heavily forested, at 1,800 feet to 2,000 feet up on the side of a mountain, about 12 miles northeast of Ketchikan. The remains of those killed in the crash were recovered on Aug 7 and sent to the State Medical Examiners Office. Investigators planned to continue conducting interviews in the case. The flight was returning to Ketchikan from a tour of Misty Fjords National Monument wilderness when it crashed. The Alaska State Troopers identified the pilot as Rolf Lanzendorfer, 64, of Cle Elum, Washington. Troopers identified the passengers as Mark Henderson, 69, and Jacquelyn Komplin, 60, both of Napa, California; Andrea McArthur, 55, and Rachel McArthur, 20, both of Woodstock, Georgia; and Janet Kroll, 77, of Mount Prospect, Illinois. The excursion the passengers were on was not sold by Holland America Line. The flight operator was cooperating with the agencies involved.

All six people who were killed in a sightseeing plane crash were recovered and identified after crews initially struggled to reach the wreckage in southeast Alaska due to poor weather conditions. Alaska State Troopers identified the pilot and five passengers late on Aug 7 following the crash on Aug 5. The aircraft went down as the pilot was returning the passengers to Ketchikan from Misty Fjords National Monument. The passengers who died were Mark Henderson, 69, and Jacquelyn Komplin, 60, both of Napa, California; Andrea McArthur, 55, and Rachel McArthur, 20, both of Woodstock, Georgia; and Janet Kroll, 77, of Mount Prospect, Illinois. The pilot was Rolf Lanzendorfer, 64, of Cle Elum, Washington. All five passengers were on an excursion off the 'Nieuw Amsterdam' in Ketchikan. The plane’s emergency beacon was activated about 11:20 a.m. when it crashed near the monument. A helicopter company reported seeing wreckage on a ridgeline in the search area, and Coast Guard crew members found the wreckage around 2:40 p.m. A Coast Guard helicopter lowered two rescue swimmers to the site, and they reported no survivors. Poor weather and deteriorating visibility hampered early efforts to recover the bodies. Alaska State Troopers and members of the Ketchikan Volunteer Rescue Squad made it to the crash site in the afternoon of Aug 7 via a chartered Temsco helicopter. The bodies of the six people will be taken to the State Medical Examiner’s Office in Anchorage. The National Transportation Safety Board will investigate the cause of the crash. The Federal Aviation Administration was also investigating.