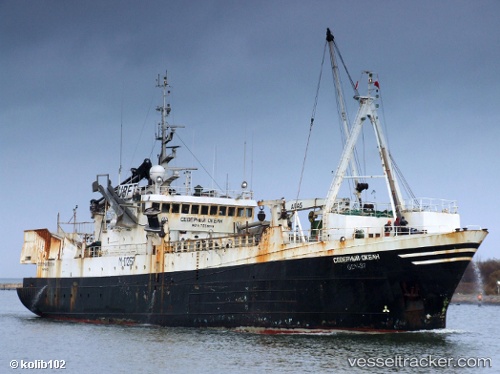 The 'North Ocean' suffered a damage to the hydraulic clutch that provides pressurization to the main engine, and requested assistance in the South Kuril Strait in position 43 55 27 N, 146 16 28 E, on Nov 4, 2021. The crew tried to repair the damage which, however, could not be fixed. Following a request for assistance, the Russian rescue vessel 'Spasatel Kavsejkin' was deployed to the vessel and took it in tow to the port of Vladivostok. The 800 nautical mile tow was finished on Nov 13.

The "North Ocean" has arrived in Tórshavn on Jan 7, after some dramatic and hectic days on the open sea. In the late evening of Jan 4 the factory trawler had asked for assistance in extinguishing a fire in the engine room. At 01.35 on Jan 5 the trawler "Christian í Grótinum" went on standby. At 05.50 a.m. the "Melkart II" took the ship in tow towards the Faroes, but the towing wire broke in rough seas. Finally at 08.30the Danish naval patrol vessel "Thetis" which had come to assist jointly with the Faroese inspection vessel "Birmil" managed to establish a tow. One crew member suffered a dislocated shoulder during the action. The Faroese fire brigade stood ready at the dock when the ship docked 4.30 a.m. The rescue force immediately checked the ship for possible remaining fires, but it showed that the quick action had minimized the fire damage though the engine was badly damaged with broken pipes, wires melted and burned insulation. Now it was assessed how the fire occurred. Of the crew of 32 was 18 were transferred onto the "Brimil". Thus, 14 men remained on board to assist with the rescue work. Reports with photos: http://www.mrcc.fo/Index.asp?pID={AEEDA992-A93A-461C-894A-A426F299A9ED}&cID={89436E6C-6999-4FA4-AE20-5969A8C84162}&RowID={F5614182-F424-4EE4-9190-2414DBF28C15}&ClearAreas=1 http://aktuelt.fo/eldurin+var+kovdur+men+hitin+hevur+verid+nogvur.html http://www.antares.fo/news-brimil+a+havnina+vid+neydstoddum+russiskum+trolara.htm

In the night of Jan 5, 2015, the Faroese Coastguard was alerted after a fire broke out in the engine room the "North Ocean" fishing in Faroese waters 90 miles south of Akrabergi. The Faroese naval and rescue vessels "Thetis" and "Brimil" were dispatched to the trawler and reached the ship in the morning. Also the trawler ”Christian í Grótinum” responded. 12 crew members were taken aboard the "Thetis", 14 remained on board. A team of six of the Coastguard was transferred on board the distressed vessel. The engine room was flooded with carbon dioxide. The "Brimil" took the casualty in tow towards Havnini where it was moored around midnight. Reports with photo: http://aktuelt.fo/north+ocean+a+havnini+a+midnatt.html http://aktuelt.fo/myndir+manningin+umbord+a+north+ocean+verdur+bjargad.html