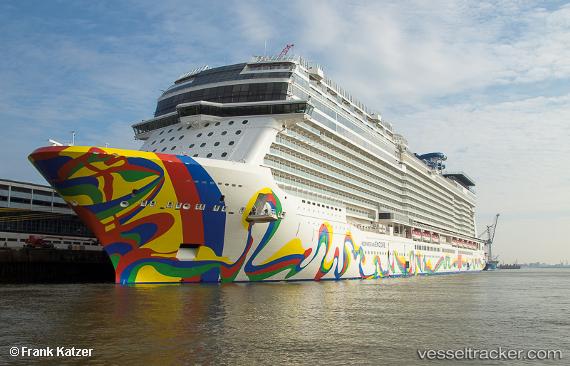 While the 'Norwegian Encore' was docked in Panama City on Nov 8, 2022, the gangway collapsed at 1.30 p.m., and several guests were injured by the incident. Emergency responders arrived quickly on the scene, and work began immediately to clear the damaged gangway. Multiple ambulances responding to the accident, and passengers were assisted via stretchers and wheelchairs to the emergency vehicles. Several passengers were immediately sent for treatment at a nearby medical facility. A CARE Team was sent to Panama City to offer additional support to the affected people. The gangway was apparently quite steep at the port and appears to have bent due to a lack of underlying support. Guests were walking across the gangway at the time of the collapse. The ship left the port again on Nov 9 en route to Cristobal. Report with photos: https://www.cruisehive.com/norwegian-cruise-ship-gangway-collapses-in-panama/87126

A US Coast Guard Air Station Sitka aircrew medically evacuated a man from the 'Norwegian Encore' in the Chatham Strait, Alaska, on July 18, 2022. Coast Guard Sector Juneau command center personnel received the request for assistance from the cruise ship at 5:48 a.m., reporting that the 64-year-old male had been suffering from stroke-like symptoms since 4:35 a.m. The MH-60 Jayhawk helicopter aircrew arrived on scene at 7:27 a.m. and safely hoisted and transported the patient to awaiting Emergency Medical Service personnel at the Mt. Edgecumbe Medical Center in Sitka. The patient’s condition was reportedly stable upon transfer to medical personnel in Sitka.

Sailing cancelled due to unforeseen circumstances

The 'Norwegian Encore's Nov 14 sailing from Miami, Florida, has been cancelled due to unforeseen circumstances. The Norwegian Cruise Line informedguests that the cruise did not take place due to unforeseen circumstances. The announcement came as the vessel remained on hold, waiting to transit the Panama Canal. Norwegian Cruise Line said the ship was delayed by two days arriving in Miami. No other reason was provided.