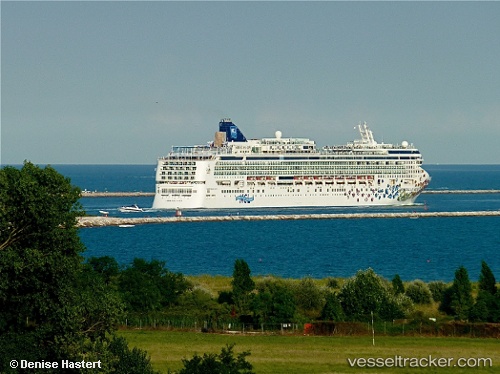 Passenger medeved due to injuries

The Port Authority of Thira was informed in the evening of Oct 26, 2022, by the maritime agent of the "Norwegian Gem", that a 44-year-old passenger of the ship needed immediate hospital treatment due to injuries and was transferred to the port of Athens, where he was picked up by an ambulance and transported to a private clinic in Thira, for the provision of medical treatment.

An SAR operation was launched for a sailing vessel, in the maritime ​​24 nautical miles westsouthwest of Paxos on Oct 14; 2022, under the coordination of the Greek Coast Guard. The cargo m/v 'Marianne Danica'and the 'Norwegian Gem' rescued 88 persons in the evening hours. They were taken to the port of Igoumenitsa, where they were transferred to a patrol boat. During the preliminary investigation carried out by officers of the Port Authority of Igoumenitsa, with the assistance of officers of the Maritime Border Security and Protection Directorate (DAPTHAS), it was established that four human traffickers, of Turkish nationality, were on board the sailing vessel and were arrested for violation of articles 30 of Law 4251/14 and 83 of Law 3386/05. The purpose of the traffickers was to transport the 84 people, who lacked travel documents, from the Turkish coast to Italy for the amount of €8,000 - €9,000 per person, while exposing their lives to immediate danger. The sailing vessel, after rescue and recovery of the migrants, sank in international waters. Report with photo: https://www.hcg.gr/el/epikairothta/synexeia-enhmerwshs-anaforika-me-thn-eyreia-epixeirhsh-ereynas-kai-diaswshs-allodapwn-sth-8alassia-perioxh-peri-ta-24-nm-dytika-notiodytika-n-pa3wn/

NCL has circumvented a ban on its ships entering the Venice lagoon by shuttling passengers into the famous city centre on small motor boats. The 'Norwegian Gem' anchored outside the Venice Lido early on July 23, 2022. It then launched several motor boats which between them dropped about 1,500 passengers off in St Mark’s Square before picking them up again in the evening. The move, which was authorised by Venice’s port authority, is reportedly part of an experiment after the Italian government last year banned ships weighing more than 25,000 tonnes from docking in the Unesco world heritage site. It followed years of protests which pitted environmentalists, who saw the vessels as damaging to Venice’s fragile lagoon, against those who worried it would affect an economy dependent on tourism. Most cruise companies have since rerouted to ports in Trieste or Ravenna, from where passengers who want to see Venice can make a bus journey of about two hours. A handful are making use of Marghera, a nearby industrial area, which has been repurposed for cruise ships as a temporary measure. The 'Norwegian Gem' was only transiting through Venice when it dropped passengers off for the day on boats provided by the city’s port authority. Italy barred huge ships from using the Giudecca canal to enter Venice’s historic centre in July 2021. The 25,000-tonne limit means only small passenger ferries and freight vessels can use the canal. The decision followed years of protests against cruise ships and a warning from Unesco that Venice was at risk of being put on the world heritage endangered list unless the vessels were permanently banned.