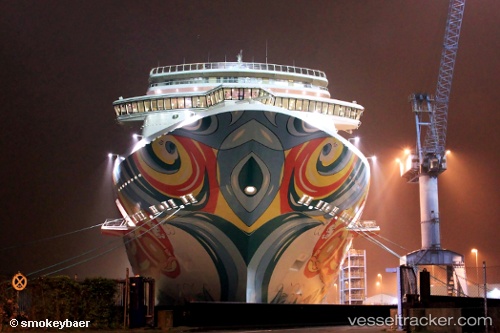 The Port Authority of Thira was informed on Oct 9, 2021, at noon that a 71-year-old passenger of the 'Norwegian Getaway' needed to be transported to hospital due to illness. The 'Taxiarchis D' picked up the patient and sailed to the Athinios Port from where an ambulance transported him to the Central Polyclinic of Santorini for medical treatment, while the ship continued its voyage from Mykonos to Neapel.

After a two-week dry dock that included millions of dollars in renovations, Norwegian Getaway completed its first sailing out of Copenhagen and is gearing up for its summer season of Scandinavian, Russia and Baltic sailing. Getaway’s changes after its late May 2019 makeover include new venues and artwork, updated social spaces and refreshed accommodations and decor. The ship now features Norwegian’s first onboard, full-service Starbucks available in the European market and Syd Norman’s Pour House, a popular rock ‘n’ roll-themed entertainment venue. Also, nearly 800 pieces of art -- 20 percent of which are originals -- were added throughout the ship.

Death on board not suspicious

A passenger has died on board the "Norwegian Getaway" which was currently at anchor off Newhaven. The man in his twenties passed away on June 3, 2019. The ship docked in Newhaven Harbour on June 4. The death is being treated as unexplained, but not suspicious, and a report will be submitted to the Procurator Fiscal. Another two passengers fell sick on the ship but their illnesses was believed to be unrelated to their fellow passenger's death. Whilst docked in Edinburgh, two people were taken into the care of the Scottish Ambulance Service in connection with medical matters. Incident response units, the Risk and Resilience Department and police officers were at the scene.