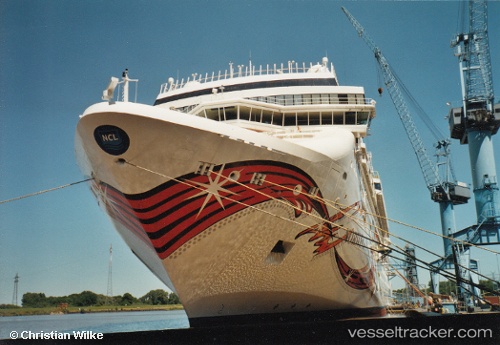 The first of the more than 2,000 passengers on the 'Norwegian Jewel' which docked at Honolulu on March 22 were let off the vessel on Jan 23. Emptying the ship is a 2-day process, involving dozens of bus rides and more than 10 charter flights. The 'Norwegian Jewel' started its journey on Feb 28 from Sydney. After a stop in Fiji, it was supposed to go to French Polynesia but it was rejected from docking due to growing concerns over COVID-19. She stopped in American Samoa to refuel but passengers weren't allowed disembark. None of the passengers were showing symptoms of COVID-19, but as a precaution, contact with the general public will be minimal. The passengers were going straight from the ship to medical screenings, to a chartered bus that's taking them directly to the airport and not the main terminal, to the south ramp, where they are isolated again and getting on chartered planes where they'll leave the state. The last charter flight for passengers is excepted to leave i nthe afternoon of March 24.

Cruise ship to be repaired in Honolulu

The 'Norwegian Jewel' has docked in the port of Honolulu in the late afternoon of March 20, carrying around 2,000 passengers. The ship has propulsion problems, which will be repaired in Honolulu. The repairs must be carried out without passengers on board. A detailed plan was being developed with Norwegian Cruise Line which kept the passengers isolated to avoid potential pressure on Hawaii's resources. The ship had to stop its 23-day cruise to Australia and French Polynesia because many ports were closed due to the coronavirus. Passengers disembarked for the last time in Fiji on March 11. Charter flights were organized for the passengers on March 23 and 24 from Honolulu to Los Angeles; Sydney; London; Vancouver, British Columbia; and Frankfurt. Because of the extra precautions needed in response to the COVID-19 crisis, it will take time to safely transport the passengers to their chartered planes. There were no confirmed cases of coronavirus among the 2,000 passengers and 1,000 crew members on the vessel.

Disembarkation in Honolulu on March 22

On March 17 the 'Norwegian Jewel' refuelled at Samoa and then headed to Honolulu, ETA March 22, where the passengers will be allowed to disembark.