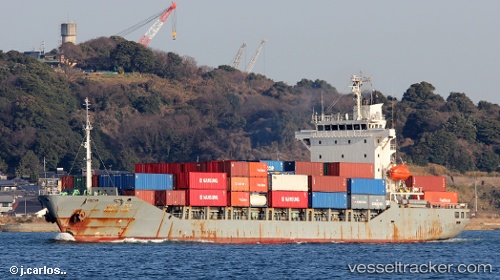 Panic on Pegasus Prima after collision

After the collision with the "Beagle III" on MAr 17 at 3.10 a.m. six kilometers off the cape of Tsurugizaki near Miura, in which 12 crew members were rescued by nearby passenger vessel and Japan Coast Guard patrol ship, one of whom later died, some kind of a panic took place on board the "Pegasus Prime". The crew of 14 tried to leave the vessel on a life boat, and two of them were injured during this attempt. In fact, the "Pegasus Prime" was severely damaged, but remained capable of sailing under own power. On Mar 18 at 7.30 p.m. the ship was heading to Yokohama with escort of some tugs. It docked in port on Mar 19 at 5.10 a.m. Two helicopters and 19 patrol ships were dispatched by the Japanese coastguard to search for the missing Chinese crew. The rescuers continued searching after the accident. Seven ships and three planes were dispatched to search for the missing while cleaning up leaking oil. A survey ship has detected an object that could be the sunken "Beagle III" in a water depth of about 100 metres.Five marine accident investigators were assigned by Japan's Transportation Safety Board to look into the cause of accident. Emergency mechanisms were implemented between the Chinese and Japanese authorities in Tokyo to establish continued efforts and proper cooperation in searching for the remaining missing crew members. The "Pegasus Prime" had been underway from Kunsan enroute to Tokyo, the "Beagle III" was underway from Yokohama to Kobe. Of the rescued crew members of the "Beagle III", six had suffered slight injuries while one was seriously injured and taken to the nearby Miuraa City Hospital, where he was in a state of cardiopulmonary arrest. Reports with photos and video: http://english.chosun.com/site/data/html_dir/2014/03/19/2014031901307.html http://www.fashiontimes.com/articles/3733/20140318/tokyo-bay-cargo-ship-collision-one-dead-eight-missing.htm http://www.clickondetroit.com/news/Eight-missing-as-ships-collide-outside-Tokyo/25028502 http://www.frequency.com/topic/transportation?cid=5-591 http://www.baomoi.com/Tau-Panama-va-Han-Quoc-va-nhau-9-thuy-thu-Trung-Quoc-mat-tich/119/13345137.epi

One man was dead and eight crew members still missing after the Panama-flagged cargo m/v "Beagle III" (IMO: 9478353) and the container m/v "Pegasus Prime" collided in a narrow waterway off Tokyo Bay on Mar 18, 2014. at 3.10 a.m. LT. Rescue efforts were underway for the Chinese crew members after the cargo ship which was carrying steel coils capsized and sank near Miura port in the Kanagawa Prefecture. 11 crew members have been rescued alive. The ship had a crew of 20, all Chinese. The "Beagle III" was heading out of the bay, after having sailed from Yokohama at 4.50 p.m., while the "Pegasus Prime" which was coming from the Busan Container Terminal, carrying 460 20-foot containers, was heading into the port near Miura Peninsula. 10 ships and a helicopter were deployed for SAR operations. Japan's Transportation Safety Board has dispatched five investigators to look into the cause of the accident. Twp crew members of the "Pegasus Prime" which was damaged but stable, were injured. The freighter had 14 crew members, six South Koreans and eight Myanmarese. Report with video: http://www.arirang.co.kr/News/News_View.asp?nseq=159370