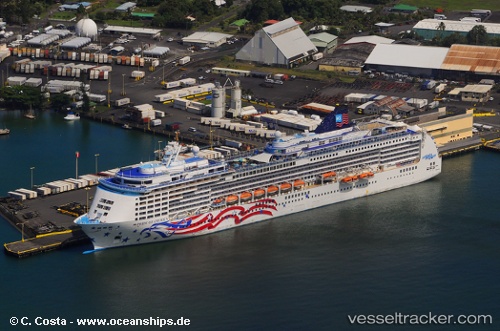 Six crew members on the 'Pride of Americ' which was docked at Honolulu Harbor have tested positive for coronavirus, and two weenow hospitalizedre. There were 500 crew members onboard the vessel. Passengers haven’t been allowed on board since March 14. The state was coordinating with the cruise line and following CDC protocol to determine when healthy crew members can be allowed to leave the ship and return to their home state. The ship is scheduled to depart Hawaii later this month to enter dry dock.

Coast Guard Sector Honolulu investigators received reports of two injuries aboard the "Pride of America" on Feb 16, 2019. A crew member sustained a hand injury while cleaning equipment aboard the vessel, and a passenger sustained minor inquires in a fall on a stairwell. Both people received treatment aboard the ship which was underway from Honolulu to Hilo.

At least five cruise lines have altered itineraries in recent weeks as a result of the ongoing Kilauea volcano eruption on the Big Island. Norwegian Cruise Line has suspended calls from Pride of America indefintely. Luigi Razeto, senior vice president of marine operations for the company, has made a statement saying, "Please be informed that due to the uncertainties associated with the ongoing volcano activity on the Big Island, it has been decided to take Hilo and Kailua-Kona … out of the POA itinerary until the situation is back to normal." The cruise line cites concerns over air quality as the primary reason for the cancellation. Norwegian's Pride of America, which sails Hawaii itineraries year-round, has been forced to skip Hilo multiple times before announcing the cancellation. Norwegian's Hawaii-based ship, Pride of America, replaced its Hilo stop on Tuesday, May 15 with a day at sea. On May 16, in lieu of calling at Kona, the ship returned to Maui, where it had already spent the day on May 13.The ship called at Kona on May 30, as planned.