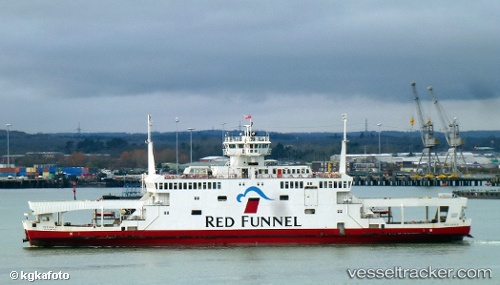 The 'Red Eagle' has rescued two kayakers in distress from the Solent in the morning of May 23, 2020, in rough seas and 30 miles per hour winds off Calshot. The ferry turned around during its 9 a.m. crossing from East Cowes to Southampton off Calshot Spit when the individuals were sighted in the water. A rescue boat was swiftly launched and the crew successfully hauled the two people aboard, before recovering them to the ferry. They were landed at East Cowes ferry terminal where paramedics from the Isle of Wight Ambulance Service and Coastguard Rescue Officers from Bembridge wattended the duo. The casualties were passed from the ferry onto the Ambulance Service.

Ferry sidelined due to anchor trouble

Many of the sailings between East Cowes and Southampton on Oct 10 and 11 have been cancelled by operator Red Funnel after an investigation into the damage done when the 'Red Eagle' lost two anchors in Cowes harbour on Oct 2, one of which was recovered earlier this week. Following the incident an internal inspection has revealed additional damage to the internal gear linkages inside the vessel’s aft Voith propeller. The extent of the damage required the operator to remove the 'Red Eagle' from service after it initially had returned to service the day after the incident. On Oct 10 the 8.15 p.m. sailing from Southampton and the 9.45 p.m. from East Cowes were cancelled as well as the sailings from Southampton on Oct 11 at 5 a.m., 8 a.m., 11 a.m., 2 p.m., 5 p.m. and 8.15 p.m. Sailings on Oct 11 from East Cowes at 6:30 a.m., 9:30 a.m., 12:30 a.m., 3:30 p.m., 6:30 p.m. and 9:45 p.m. were also off. The Red Funnel team was reviewing plans for a revised vehicle ferry timetable from Oct 12 and will issue another update once they have more information. The technical team was establishing an ETA to acquire replacement parts and repair of the 'Red Eagle' and planned to communicate that expected timeline as soon as possible. The ferry was sidelined at the New Cruise Terminal in Southampton.

The anchor from the 'Red Eagle' has been retrieved from the bottom off Cowes on Oct 8, one week after it was lost off the Isle of Wight during a sailing from Southampton to East Cowes on Oct 2 at 9 a.m. It had been found by divers five metres below the surface and was recovered in good condition. The vessel has been operating with one anchor. The second anchor is due to be refitted when the vessel goes in for annual maintenance in November. The ship had returned to service on Oct 3 after its hull was inspected. Report with photos: https://www.bbc.com/news/uk-england-hampshire-49985918