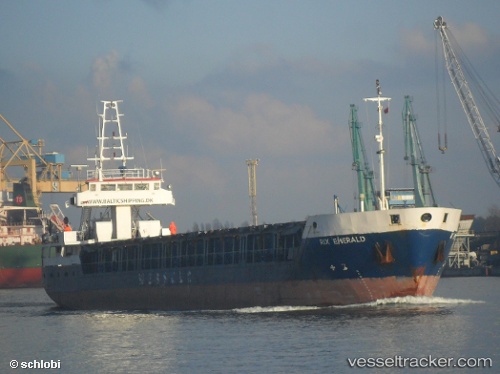 PSC will keep an eye on ship even after release

After the deficiencies were rectified, the 'Rix Emerald' was allowed to leave Kalmar harbor in the evening of Oct 28 as the ship was considered as seaworthy by the Swedish Transport Agency. However, the port state control in Europe will continue to keep an eye on the vessel. Within 90 days, they will step aboard again and follow up what needs to be addressed. The port state control in Sweden takes a serious look at what has happened, finding it extremely regrettable that these vessels are sailing along its coasts. They create unhealthy competition and pose a danger to themselves and others. Parts of the report were about critical systems that have been shut down. The 'Rix Emerald' berthed in Liepaja on Oct 30 and sailed again on Nov 1 at 1 a.m., next bound to Kolding with an ETA as of Nov 3.

The "Rix Emerald" has been prohibited from leaving port after its arrival in Kalmar on Oct 24 by the Swedish Transport Agency in the follow up of a port state control. The officials found 24 shortcomings, many of them serious. The ship was poorly maintained. One of the most serious shortcomings was that the emergency generator did not work. Dangerous life-saving deficiencies were also discovered. There were suspicions of double accounting for the crew. The ship may not leave port until the deficiencies have been rectified. The Swedish Transport Agency has informed the police and the Coast Guard about the situation. The ship left the port again on Oct 28 at 11.30 p.m. and headed to Liepaja with an EAS as of Oct 29, 8.20 p.m. Swedish report with video: https://www.svt.se/nyheter/lokalt/smaland/skenande-fartyget-flyttas-runt-i-hamnen-for-att-inte-skapa-problem

After the 'Rix Emerald' berthed at Kalmar on Oct 24 at 7.50 a.m., the Swedish Transport Agency went on board to carry out a very throrough inspection of the whole vessel after two weeks ago bridges on the Göta River were forced to open after the had engine problems and could not stop with a cargo of 2,300 tonnes of oatmeal. The 'Rix Emerald' managed to anchor in Hönö, but before an inspection was done the ship left without permission as, according to the skipper there were "no problems". The ship then steered towards Montrose West of Skagen, the AIS system was shut down. If it turns out that the ship cannot meet certain parts of the regulations, it can be banned from sailings until the errors have been rectified. Two bans will have the consequence that the ship may not dock within the EU for one year. Now the captain - who decided to interrupt the conversation with Swedish authorities - will be questioned by the Swedish Transport Agency's inspection. In addition, an ITF inspector will investigate the payment of the salaries. There were also doubts about double entries. The Swedish Transport Agency expected the inspection to take a few hours to complete depending on how cooperative the crew is. The "Rix Emerald" has previously been involved in several traffic violations. The same captain was also on board when the ship ran aground off Landskrona in January this year.