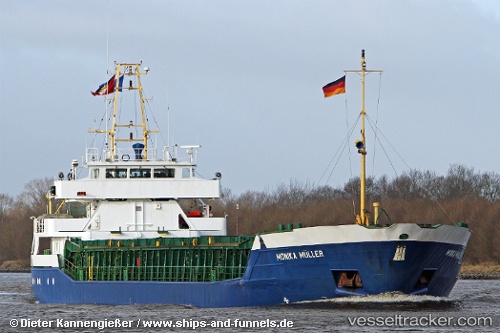 Enroute from Frederiksvaerk, where she had sailed onApr 17 at 3.15 p.m., to Papenburg, ETA Apr 19, the "Rix Partner" was stopped in the Great Belt on Apr 17, 2018, at 11 p.m. Initially there were communication problems with the Russian captain, after the Danish Navy remarked the ship had a suspicious sailing pattern. It started to move outside the route that it should have followed. The VHF communication with the captain turned out to be incoherent, so the guard at the Defense Operations Center suspected him to be affected by alcohol. In co-operation with the police, the ship was stopped and the captain had to make a breathalyzer test which showed he was intoxicated. He was transported ashore by the patrol boat "Freja" on Apr 18 at 3 a.m., and a blood test was carried out. On Apr 18 the exact result was expected, but there was certainly no doubt that he was drunk. The "Rix Partner" was advised to anchor south of the Great Belt Bridge in pos. 55° 14.75' N 011° 2.81' E near Nyborg until it was known what was going to happen to the captain. Both the police and the Danish Maritime Authority must decide upon the further proceedings, but at least he must be completely sober before returning onto the ship. The captain remained detained and will be charged for the violation of the navigational rules. There will probably also be a fine. With a new captain the ship left its anchorage south of the Great Belt Bridge on Apr 19 and resumed the voyage from Frederiksvaerk to Papenburg, ETA Apr 20, 5 p.m.

Captain of Rix Partner first praised, then fired and cheated for salary by owner

First, the Russian captain of the "Rix Partner" was praised by his shipowner, and then he was fired. When he was due to arrive at Vordingborg in the morning of Jan 30, he lost control of the ship, it was caught by the heavy gusts of wind and got stuck. But in the afternoon, the crew managed to get free with own power and they berthed at the quay in Vordingborg half a day late. Here they were met by a representative of the Latvian shipping company Rix Shipmanagement, who expressed that the shipping company was grateful that he had handled the situation exemplarily with the successful manoever to get off. But a few hours later the captain was fired. Meanwhile, ITF inspector Peter Hansen had also boarded Vordingborg, and the now thr captain asked for help to ensure that he would get his salary. When he reviewed the papers, he found out that the captain's rental contract indicated a month rent in Euro while it was agreed internationally - and ITF approved - to pay the salary in US dollars. Additionaly, the numbers did not match. In relation to the captain's salary, there was thus double bookkeeping. Indeed, the shipping company cheated him for what amounted to 5,000 Danish crowns per month. The company's representative was possibly prepared for the situation, because he had enough money to pay the captain what he owed.

On Jan 30 2018, at 3 a.m. the "Rix Partner", having sailed from avedore at 8 p.m., ran aground upon entry to Vordingborg in the Masned Sound. The ship had a speed of less than two knots when it was caught by currents and slid onto a mud bank so therre was no expectation of damage and pollution. The tug "Loke" (MMSI: 219001619) assisted the vessel, and after it was refloated, it berthed in Masnedo on Jan 30 at 12.30 p.m. The ship was detained until it has been investigated for possible damage. Danish reports with photo and video: https://www.sydtid.dk/skib-p%C3%A5-grund-i-masnedsund https://www.tveast.dk/artikel/skib-gaaet-paa-grund-ved-vordingborg