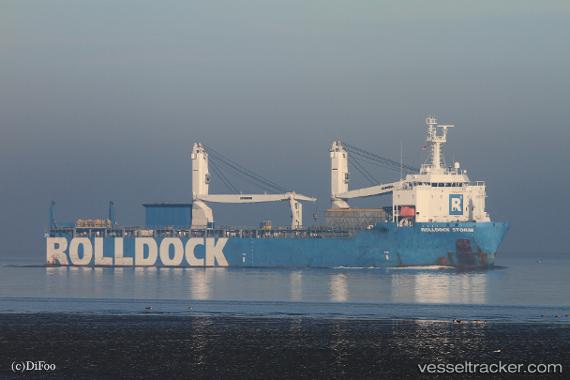 Rolldock Storm is, like its three sisters, multi-functional: a pair of 350 tonne Liebherr heavy lift cranes give it tandem lift capability and its ro-ro ability is supported by a heavy duty, 4,000 tonne stern ramp with adjustable heights, allowing the vessel to adapt to port piers at differing levels. As a result single loads weighing up to 3,000 tonnes can shipped in classical ro-ro mode, a useful point given the tendency toward increasing individual parcel weight. The ship can also be submerged by 12m to permit cargo to be floated in or out: unlike the more usual sloping sides, the vessel’s dock hold is carved out to be a 119.44m by 19.40m box shape.

Shipbuilders in Flensburg handed over ROLLDOCK STORM to Dutch shipping company RollDock BV for immediate operation world-wide in the transport of specialised heavy cargo and project loads. The delivery of ROLLDOCK STORM means that Flensburger Schiffbau-Gesellschaft (FSG) has now successfully completed an order for two sister ships to the complete satisfaction of the customer. ROLLDOCK STAR and ROLLDOCK STORM are 151.5 metre-long, multi-functional, specialised ships designed to transport challenging, heavy loads which do not fit traditional cargo transport moulds. They stand out particularly because of their maximum flexibility and offer a range of different loading and unloading possibilities. Two heavyduty cranes move cargo weighing up to 700 tons. In addition they boast height-adjustable stern ramps as well as hatch covers which can also be adjusted, making the two ships adaptable to piers of differing heights in ports. As a result, individual loads of up to 3,000 tons can be taken on-board or offloaded in classical RoRo mode. In addition however the 8000 ton deadweight ships can be submersed by about six metres, meaning that cargo can also be floated in and floated out. ROLLDOCK STAR, in service since January this year, carried a floating pavilion from Amsterdam to Gibraltar, a river cruise ship from Fos to Bordeaux and a submarine from Kaliningrad to Vietnam. FSG Chief Peter Sierk said “this demonstrates that we are now clearly moving in an extremely demanding and very specialist sector. Ships likethis, as well as individual offshore ships, are now the future of FSG and follow on fromour successes in the RoRo sector”. He added that the entire work force in Flensburg had demonstrated it was possible to successfully deliver excellent ships despite the highest of demands. “Rolldock has told us that they are very satisfied with STORM and STAR”, said Sierk. “In addition we know that STAR is performing splendidly in daily operation and that everyone at Rolldock is full of praise for our work.” The yard chief also has particularly positive words to say about FSG’s co-operation with the Dutch over the past two years. “In RollDock BV we have found a partner whois absolutely reliable and is one we have been able to help, with our two special new buildings, to meet the demands of its customer’s world-wide. Our co-operation has been marked not only by great trust but also by growing friendship – because that’s something else that sets us apart: top quality professional work, but in a friendly environment. Source : Flensburger Schiffbau-Gesellschaft mbH & Co. KG