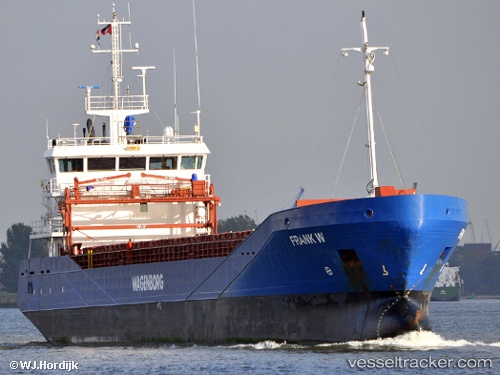 The 'Ruyter', enroute from Kotka to Delfzijl, suffered an engine failure upon entering the old Northern lock of the Kiel Canal in Brunsbüttel on Nov 8, 2019, at 06:30 a.m. The police launched an investigation while the ship was berthed inside the lock, before the tugs 'Bugsier 15' and 'Bugsier 19' pulled the ship stern first out of the lock and back into the canal where it was moored at the railway station pilings in Brunsbüttel at 8.15 a.m. It resumed the voyage from Brunsbüttel on Nov 10 at noon and arrived in Delfzijl on Nov 11 at 10.40 p.m. and berthed in the merchant port.

The "Ruyter" grounded in Northern Ireland when the master left the bridge unattended on Oct 10, 2017. Investigators discovered that the captain of cargo vessel left the bridge unmanned and without the main alarm that would have alerted the rest of the crew. Full report: http://www.marinemec.com/news/view,accident-report-empty-bridge-leads-to-ship-grounding_52216.htm

Upon arrival of the "Ruyter", loaded with timber from Russia, at Warrenpoint on Oct 11 at 1.30 p.m. it was down by the bow by 0,75 meers and a list were visible. AFter docking, an inspection was carried out, during which extensive damage to the hull was found. The bow thruster compartment, the double bottom and forepeak tanks were flooded and part of the deck cargo had shifted. The port captain immediately demanded an underwater inspection which revealed extensive damage to the front third of the vessel. The Russian captain Aleksandr Iakovtsov was fined £1,000 at the Armagh Magistrates’ Court after pleading guilty faulty navigation. He declared himself guilty of not keeping a proper lookout, failing to navigate safely and cause serious damage to the ship. The judge Paul Copeland said: "It should have been apparent to you as an experienced mariner that you were on a collision course as you left Islay towards Northern Ireland. You chose to leave the bridge as the ship approached the coast of Ireland. It should have been apparent to you from the radar that you were getting close to the shore. The lights on Rathlin should also be apparent to you. You are fortunate the ship struck a shallow patch under the cliffs and that you were able to come off in a short time.. You did make an immediate report and engaged the support and rescue services. Fortunately, no one onboard was injured. It is understandable that you may not have been aware of the extent of the damage until after some time - fortunately there was no further incident. I’m satisfied it was not aggravated by alcohol and that there were no other ships put in danger by the progress of your ship. I am also taking into account you have been 31 years at sea with 16 years as captain and in this context you have been relieved of your command and this will affect your future work.” The captain was released after the hearing and returned to Russia. The cargo of timber bwas unloaded at Warrenpoint. However, the vessel was still being detained by the MCA until its surveyors have accepted plans from the owners about how they plan to carry out the necessary repairs and have it towed to a dock to carry them out. The ship had left the Russian port of Lemosov on Oct 3. It passed through the ports of Copenhagen and South Ronaldsay in Scotland before making the final leg of its journey to Northern Ireland. Just after 10.30 p.m. on Oct 10, the UK Coastguard received a radio message that the vessel had run aground on the north side of Rathlin. The Rathlin Coastguard Rescue Team and Portrush RNLI lifeboat were sent to monitor the incident as the "Ruyter" corrected itself back to a fit state to sail onwards. She called HM Coastguard in Belfast to report the incident, but reported no damage at that stage. With Storm Ophelia approaching Ireland, the freighter was allowed to dock at Warrenpoint, and an inspection conducted by the MCA resulted in it being detained. Reports with photos: http://hmcoastguard.blogspot.de/2017/10/ships-captain-fined-after-vessel.html http://www.belfasttelegraph.co.uk/news/northern-ireland/negligent-skipper-whose-ship-ran-aground-on-rathlin-is-fined-1000-36240514.html