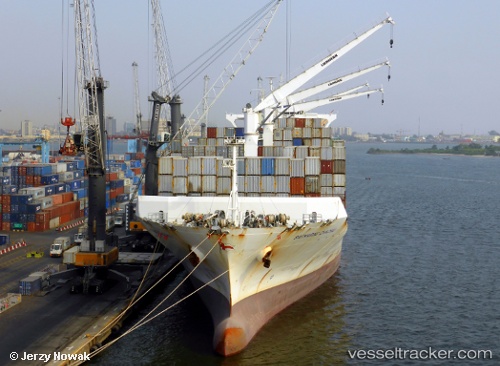 On Feb 24, 2013, the NSRI Table Bay station in Cape Town was activated by the Transnet National Ports Authority (TNPA) following reports of a stowaway adrift at sea on a life-raft in the vicinity of Robben Island. The sea rescue craft "Spirit of Vodacom" was launched and the SA Police Services Sea Borderline responded after the "Safmarine Chachai", lying at anchor at 4 Buoy in Table Bay and waiting to enter the port, had noticed an unidentified man launching a life-raft from their ship. The life-raft was successfully launched by the man but he was drifting towards Robben Island and the ship requested assistance from the TNPA. On arrival on-scene a search commenced, and in full moon and good sea conditions the life-raft was located east of Robben Island by the police boat and police officers recovered the man from the life-raft. The man, a 19 year old from Libya, was transferred onto the sea rescue craft where he was medically checked by the NSRI medics and although dressed only in a pair of shorts he was found to be suffering only mild dehydration. The police boat escorted the sea rescue craft with the man onboard to the NSRI sea rescue base and a Netcare 911 ambulance was dispatched to further evaluate the medical condition of the man. He was in a satisfactory condition suffering only mild dehydration. The stowaway was taken to the Table Bay Port Police Station and he remains in police custody. The operation was completed at 01.30 a.m. on Feb 25. The man had boarded the ship in Ghana as a stowaway and he claimed that he was not aware where the ship was headed. Police are investigating and the Department of International Relations and Cooperation have been informed. The liferaft was returned to the "Safmarine Chachai".

Safmarine Chachai, a new 4,500 teu, Safmarine-branded WAFMAX containership, was delivered to Safmarine on May 22nd 2012. The ship joins sisterships, Safmarine Chilka and Safmarine Chambal. The ships have been purpose-built for the trade with Africa and have been deployed on the Far East – Africa trade. “Not only has this modern new vessel been purpose-built for the growing trade with Africa, but it is yet another example of the A.P. Moller-Maersk Group's commitment to investing in modern, more environmentally-friendly vessels and in growing and strengthening the Safmarine brand,” said Safmarine CEO, Grant Daly. Safmarine Chachai and her sister ships were built by Hyundai Heavy Industries and are fitted with super long-stroke main engines and a waste heat recovery system to reduce emissions and save fuel, says the shipping line