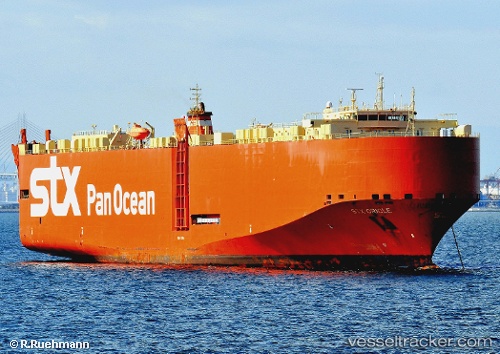 The "Gral San Martin" left the port of Cadiz on Oct 18 after lengthy repairs of damage caused by water ingress in Santos in São Paulo. She called at Las Palmas on Oct 23 and headed to Santos on Oct 24, ETA Oct 21.

The "Gral San Martin" left the port of Santos in São Paulo, on June 7 after having been more than two months inoperative at the quay. The vessel was being towed by the Liberian offshore tug "De Zhou" (IMO: 9350575), to the port of Las Palmas for repairs. On April 3, the ship arrived at Santos for unloading cars at the Terminal Exporter of Vehicles (TEV). The stay was intended to last ten hours. Before leaving the port, however, the engine room became flooded with at least 3,000 tons of salt water. On May 25, the vessel was moved from the VTE on the left bank to warehouse 33 on the right bank by four port tugs. At that time, it was awaiting documentation that would provide security for it to be towed away. Despite repairs, the serious flooding damage prevented the ship from resuming operations in the engine room. The convoy arrived at Cadiz on June 28 at 1 p.m., and the ship was berthed at the Astilleros de Cadiz Navantia for repairs. Portuguese report with photos: http://g1.globo.com/sp/santos-regiao/porto-mar/noticia/navio-sem-propulsao-segue-para-a-europa-apos-ficar-mais-de-dois-meses-inoperante-em-santos.ghtml

The dewatering of the compartments of the "Gral. San Martin" which remained moored at the quay of the Tecon Container Terminal in the port of Santos has been completed on May 8 more than a month after the flooding. Now the vessel will undergo a desalination process and a complete cleaning. The ship got the engine room flooded on April 3, when it was due to leave for Rio de Janeiro. The São Paulo Ports Authority (CPSP) awaits a request for an inspection of the vessel. This should happen after the desalination process and also the necessary repairs on the electrical installations of the ship. Only after approval of the Maritime Authority, the "Gral. San Martin" may leave the quay of the TEV, with the aid of tugs. Before the flooding occurred, the ship had unloaded 355 vehicles with 572 vehicles remaining on board, two for the Port of Rio de Janeiro and the other 570 for the Port of Paranaguá in Paraná. Portuguese report with photo: http://www.atribuna.com.br/noticias/noticias-detalhe/porto%26mar/navio-gral-san-martin-retira-agua-da-sala-de-maquinas/?cHash=770b373a5704e506248e53afd70db172