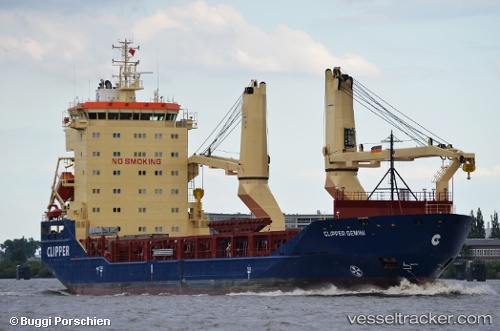 The port authority of Gdansk has detained the 'Saoura' for administrative reasons in connection with the certificates. The ship was delayed at the port of Gdansk following a certificate verification operation for 1,5 days after the end of its commercial operations on Jan 24, 2020, for an uderwater survey of the hull as part of the annual certification schedule of the ship. After the works were finished, the authorities of the Polish port of Gdansk decided to block the ship for administrative reasons related to the certificates. The inspector of the Port State Control of Gdansk estimated that the ship's statutory certificates, issued on Sep 19, 2019 after a regulatory inspection by the Algerian maritime administration at the port of Oran, were not compliant. The company, after ensuring that everything was in order, contacted the management of the merchant marine and ports, the classification society as well as the Algerian consular authorities in Warsaw, in order to intervene and clarify the situation concerning the conformity of the certificates. After receiving the necessary clarifications, the Polish authorities authorized the ship to leave the port of Gdansk in the evening of Jan 27 with 76 milk powder containers, i.e. 1900 tonnes, on board bound for the port of Antwerp to load an additional 40 containers with milk powder and other types of goods as part of FOB imports (free of charge on board) on behalf of the National Interprofessional Milk Office (ONIL) bound for the ports of 'Algiers and Annaba.

An SAR helicopter based in Gando (Gran Canaria) has medevaced a crew member of the "Saoura" who needed medical assistance 450 kilometers south of the island on Nov 27, 2018. A Super Puma aircraft of the SAR Canarias and a Sasemar 103 Maritime Rescue aircraft were deployed. Once hoisted aboard the military helicopter, the patient has been transferred to the heliport of the Hospital de Gran Canaria Doctor Negrín.

The "Saoura" had a pump failure while sailing off the British coast and diverted into the Bay of Douarnenez on Jan 1. The ship had departed from Antwerp on Dec 23, 2017, with containers and general cargo on board, bound for Algiers, ETA Jan 3. As repairs could not be done at anchorage the vessel proceeded to Brest, where it berthed on Jan 1. It sailed again on Jan 8 at 4.38 p.m., ETA Algier Jan 13.