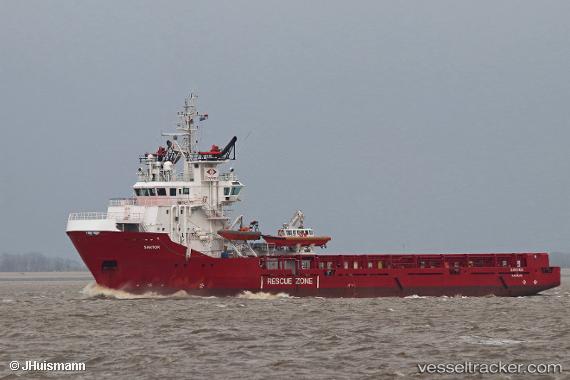 While the 'Sartor' was anchored on Aberdeen roads on Feb 15, 2020, a link of the anchor chain failed. The anchor and five shackles of the chain fell into the water. The master and the owner liaised for the recovery of the anchor.

The former "Malaviya 7" which was stranded in Aberdeen for more than a year has finally left the city. After the ship was detained in October 2016, its crew members had been largely confined on board due to not having the necessary travel documents to be in the UK. For much of 2017, they were reliant on the goodwill of Aberdeen residents for food to survive. The supply ship was finally sold to a Norwegian firm in November. This allowed the remaining crew to return to India, however it emerged earlier in January 2018 that the crew were still owed £670,000 in unpaid wages. Now sailing under the name "Sartor", the vessel left Aberdeen Harbour in the afternoon of Jan 27, bound to Sczcecin, ETA Jan 30.

The "Malaviya 7" which has been detained in Aberdeen for more than a year could finally be on the move after an offer to buy the vessel was accepted. The ship was detained in June 2016 and again in October under merchant shipping regulations. The vessel has been bought for an undisclosed amount, but the settlement was believed to be enough to cover the wages. The ship had failed to sell at auction last month, having been withdrawn after only receiving a modest bid of £300,000. A sheriff had ruled in September that it could be sold at public auction. Six crew members then headed home at Aberdeen International Airport.  The International Transport Workers Federation (ITF) union has been supplying the crew with food and water, with support also given by seafaring organisations and the Aberdeen community. The crew has remained largely on-board amid fears they would not be paid if they disembarked. Report with photo: http://www.scotsman.com/regions/aberdeen-north-east/workers-to-finally-be-paid-after-detained-aberdeen-supply-ship-bought-1-4607427