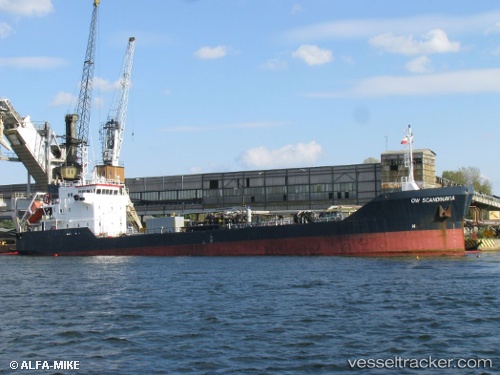 The 'Scandinavia' lost its port side anchor, together with five shackles, in position 51 56 24 N, 003 47 24 E, in the Hoek van Holland anchorage area, due to adverse weather on Dec 14, 2019, at noon. The ship was enroute from Dunkirk to Rotterdam and remained moored at the RTM Anchorage as of Dec 16.

Tanker back in Copenhagen after oil recovery

On Sep 12, 2013, the "OW Scandinavia" returned to Copenhagen after having taken aboard 251 tons of fuel oil from the sunken Bulkcarrier "Fu Shan Hai" after the recovery ended in the night after 50 days of work. As the water at the seabed has a temperature of only four degrees, the oil in the tanks had become viscous. To pump up the oil, it was therefore warmed up with steam to 75 degrees. JD Contractor who has been responsible for the emptying of the tanks of the "Fu Shan Hai" working with the "Vina", the "Gunnar Thorson", "Gunnar Seidenfaden" and the 2OW Scandinavia".

On Aug 20, 2013, the last oil from the main fuel tanks of the sunken Bulkcarrier "Fu Shan Hai" off Bornholm was pumped into the "OW Scandinavia". The two large fuel tanks in the Chinese ship Fu Shan Hai have now been completely emptied of 10 year old oil. All in all, there has been pumped more oil up than expected. It turned out that the tanks contained far more oil than was estimated when the ship sank in the Hammergattet. There were also picked up some drums with oil, but there was still more oil left in the ship. The salvage company JD Contractor is responsible for the fuel removal. Much of the work is done by divers, who are based on the diving vessel "Vina", which together with the tanker, one of the Navy's Environmental ships and a patrol vessel was participating in the work. If the weather cooperates, the work was expected to be finished in early September 2013. Danish report with photo: http://www.maritimedanmark.dk/?Id=19828