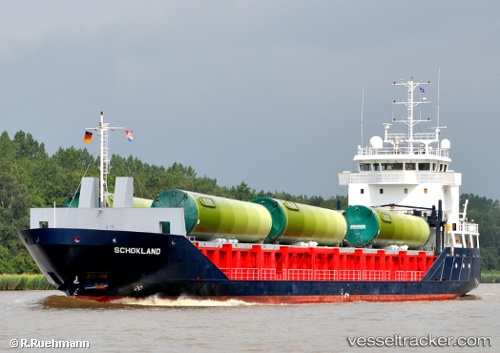 The "Schokland" arrived alongside Hatston Pier in Kirkwall shortly before 1 p.m. on Feb 8 after having taken in tow by the Orkney Towage tug "Einar" two miles off the south-west coast of Hoy late on Feb 6. The convoy was assisted by the pilot boat "Kirkwall Bay" in bringing the vessel safety alongside Hatston Pier. Reports with photos: http://rnli.org/NewsCentre/Pages/RNLI-Longhope-Lifeboat-stands-by-drifting-cargo-ship-in-Pentland-Firth.aspx http://www.orcadian.co.uk/2016/02/stricken-dutch-ship-arrives-alongside-hatston-pier/ https://www.facebook.com/31395967167/photos/a.222229797167.114824.31395967167/10152866426197168/?type=3&theater

On Feb 6, 2016, the "Schokland", carrying a cargo of wind turbine parts from Emden to Londonderry, lost power at the west side of the island of Hoy. The situation was discussed by the MCA in Shetland, the ship’s owners and agents, and OIC Marine Services, and it was decided that the OIC marine services tug "Einar" (IMO: 8820327) would take the ship in tow, with the Maritime and Coastguard Agency emergency tug "Herakles" and the Longhope lifeboat on hand to provide additional assistance if required. The Longhope lifeboat launched just before 5 p.m. and proceeded to the vessel. The "Herakles" and the Longhope lifeboat stood by while a line was put aboard the "Schokland". The "Herakles" then accompanied the Schokland and the "Einar" until they had passed through and were clear of the Pentland Firth. Originally, it was planned to tow the Schokland to Aberdeen, but Aberdeen harbour was closed to shipping because of wind and sea conditions. In the morning of Feb 8 the convoy was heading for Kirkwall with 5 knots speed. The Longhope lifeboat has returned to her station in Longhope Hoy and the Coastguard tug "Herakles" returned to her berth at Hatston pier Kirkwall on the Orkney mainland.

After the "Schokland" had departed from Cape Town on Mar 27, 2014, at 5 p.m., the cargo vessel encountered propulsion problems west of Dassen Island. The salvage tug "Smit Amandla" was called to assist. It managed to made a tow connection and towed the vessel into the Table Bay, were she was handed over to harbour tugs. On Mar 29 at 8.20 a.m. the ship was back in Cape Town and docked at the Jackson Wharf. Dutch report with photos: http://www.tugspotters.com/site/content/2014/03/schokland-casualty/#