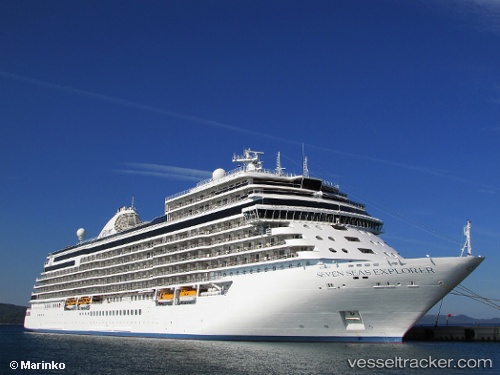 On April 22, 2019, at 11.20 pm, an SAR operation of the Italian Coast Guard was taken for the meadevac of a 78 year old pasenger on board the "Seven Seas Explorer" off the Island of Elba, which was en route from the port of Livorno to Civitavecchia. The Portoferraio Port Master's Office, under the coordination of the Livorno Maritime Directorate, intervened with the patrol boat "CP 805" on which he also embarked health service personnel. Due to adverse weather and sea conditions, the cruise ship was diverted towards the port of Portoferraio, where it was then anchored safely, with the help of the pilots of the port, around 01.50 a.m. on April 23. Taking off the patient was made difficult due to the sharp deterioration of the weather and sea conditions. The cruise ship launched a tender boat in order to facilitate the operations transfer of the elderly passenger. The convoy then arrived in port at about 03:00 a.m. and with the support of the local fire department the passenger of Canadian nationality was disembarked at the dock in front of the Port Master's Office to be transferred with an ambulance to the hospital in Portoferraio. Italian report with photo: http://www.tenews.it/giornale/2019/04/24/soccorso-un-passeggero-colto-da-malore-a-bordo-di-nave-da-crociera-78814/

Call at Dartmouth terminated due to stormy weather

The call of the "Seven Seas Explorer" at Dartmouth on Sep 21, 2017, was cut short due to bad weather. The vessel had been due to anchor off the mouth of the Dart, with passengers coming ashore by tender. Due to the bad weather and concerns about tendering guests from the ship into the river, the captain took the decision to terminate the visit to Dartmouth. The vessel remained at anchor for approximately an hour, in order to assess the situation. The ship instead headed out for a slow steam to its next port of call, Southampton, arrinving there in the morning of Sep 22. Report with photos: http://www.devonlive.com/news/devon-news/bad-weather-causes-cruise-ship-511173

A reader of Cruise Law News sent me a article appearing today in the British newspaper, Daily Mail, titled Grandmother, 83, is kicked off her 6-star cruise for having a panic attack: Dementia sufferer and her veteran husband claim they were thrown out of their £8,000 suite after she fell ill. 84 year-old grandmother Marguerite Hayward was traveling with her husband, war veteran Fred Hayward, on board the Regent Seven Seas Cruises Explorer when she awoke late one night suffering from a panic attack linked to her dementia. The ship doctor and nurse responded to the incident along with the chief of security who appeared in the couple's luxury suite, reporting yelling at Mrs. Hayward to "keep quite," according to the tabloid. The medical team injected Mrs. Hayward with a sedative and she Regent Seven Seas Cruises Explorerquickly fell asleep "with her husband cuddling her." http://www.cruiselawnews.com/2017/05/articles/worst-cruise-line-in-the-world/radison-seven-seas-kicks-elderly-couple-off-explorer-cruise-ship/