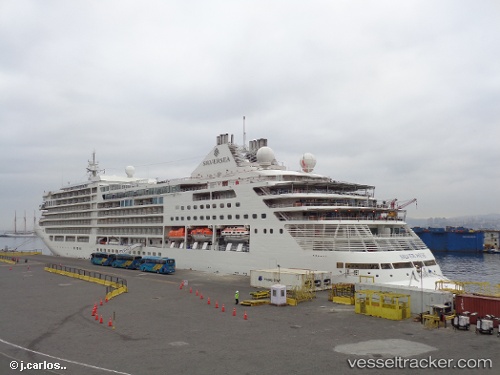 Royal Caribbean Cruises Ltd. (RCL) is to acquire a 67% stake in privately owned luxury and expedition cruise operator Silversea Cruises. Under to agreement, RCL will purchase a 66.7% stake of Silversea for around US$1 billion based on an enterprise value of approximately US$2 billion. Silversea owner Manfredi Lefebvre D'Ovidio will retain the remaining shares in Silversea and continue his role as the company’s executive chairman. He will also qualify for an estimated contingent consideration of around 472,000 RCL shares, payable upon achievement of certain 2019-2020 performance metrics. Silversea currently operates four expedition ships and five classic cruise vessels and will welcome Silver Moon and Silver Dawn in 2020 and 2021. The line also has an option for a third sister ship.

The US Coast Guard medevaced a 76-year-old man from the "Silver Muse" on Apr 26, 2018, approximately 80 miles south of Nantucket. The cruise ship contacted Coast Guard watchstanders via satellite phone at about 9:30 a.m. reporting one of their passengers was experiencing symptoms of paralysis and needed further medical treatment. A Coast Guard Air Station Cape Cod helicopter crew deployed to assist, arrived on scene at approximately 11:45 a.m. and hoisted the man. The aircrew then transported the man to Cape Cod Hospital where his care was transferred to awaiting medical personnel.

Luxury line Silversea will reward its growing base of Australian passengers by sending its newly christened ship Silver Muse to cruise in Australian waters over the 2018/19 summer season. The 596-passenger vessel is scheduled to arrive in Sydney on 6 January 2019, docking at the White Bay Cruise Terminal. While not officially announced, Cruise Critic has been informed of plans to bring the line’s newest vessel down under. Silver Muse will become the second luxury mid-size ship to visit Australia in its first two years of operation, following the arrival earlier this year of Seabourn’s new Seabourn Encore. Speaking at a launch party for Silver Muse in Sydney this week, the line’s Director of Sales and Marketing Asia-Pacific Amber Wilson said itinerary details and reservations for Silver Muse and the rest of the fleet in the first quarter of 2019 will open “in the next few weeks”, however she anticipated Silver Muse would offer a pair of itineraries between Sydney and Auckland in each direction, sailing around the country’s southern tip. http://www.cruisecritic.com/news/news.cfm?ID=7759