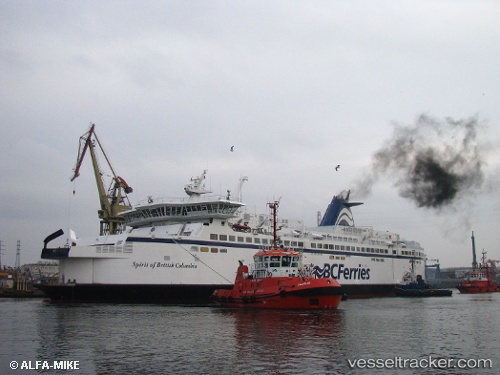 The "Spirit of British" Columbia ferry will be out of service until mid-May, causing more cancelled trips between Tsawwassen and Swartz Bay. The vessel’s rubbing strake was damaged while she attempted to dock during a storm on April 27, and repairs were ongoing. While passengers will continue to be accommodated on other vessels, there are some morning cancellations on May 6 and May 13, as well as the cancellation of the May 7, 12 p.m. sailing from Swartz Bay until May 14, and the 10 p.m. sailingon May 12 from Tsawwassen. The ship sailed from Robert's Bank on May 13 at 10.45 p.m.

In the afternoon of April 27, 2019, the "Spirit of British Columbia" suffered damage due to adverse weather conditions. The vessel remained in the Tsawwassen dock, until further notice as engineers assessed the situation. A timeline for repairs was to be provided on April 28, along with any future sailings that may be impacted. The ship had sustained damages to its hull plate rubbing strake due to strong winds between Vancouver and Victoria.

B.C. Ferries cancelled two sailings on the "Spirit of British Columbia" between Tsawwassen and Swartz Bay in Victoria because of mechanical problems on Nov 28, 2018, leaving the "Coastal Celebration" to provide regular service on that route. The 7 a.m. departure from Tsawwassen and the 9 a.m. departure from Swartz Bay were cancelled on that boat because of a problem with its fuel pumps. Specialized technicians have been brought in to fix the problem. The cause has been traced to a faulty electrical connection that has caused damage to some components.