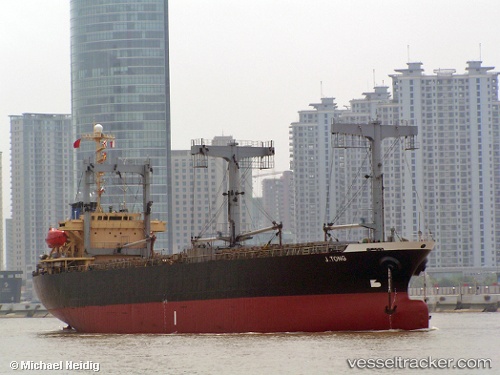 After two months the "Taj" left Saint Malo on Feb 15 at 3.45 p.m. for order towards the Atlantic. The vessel had been detained at the wharf until trepairs were made so that it could return safely back to sea. The ship had problems with corrosion and 20 nonconformities to the international regulations, all aggravated by a storm it had encountered in the Bay of Biscay, where it had lost the mast, equipped with a radar and a radio antenna. The vessel was allowed to sail after joint endorsement of a classification society, approved by the flag State and the ship safety center. It had on board a crew of 20, Syrians, Indians and Egyptians with a Syrian captain. French report with photo: https://www.ouest-france.fr/bretagne/saint-malo-35400/saint-malo-le-taj-repare-enfin-pu-quitter-le-port-cet-apres-midi-6225295

The "Taj" which was being berthed in Saint-Malo since Dec 2,2018, will finally leave the Vauban Basin in the afternoonof Feb 15. The ship, loaded with fertilizer, had left Aqaba and encountered a violent storm in the Bay of Biscay at the height of Belle-Ile, and the mast with the radar and navigation devices cracked and fell into the water so that the ship had to divert to Saint-Malo. The damage immediately triggered an inspection of the Maritime Affairs which ordered the Turkish shipowner to ensure the settlement of all work. The vessel was therefore held for repairs and certain adjustments. In addition to the installation of a new mast, it was necessary to upgrade the fire stations and renew the insurance of the ship which took a lot of time. The repairs and repairs were carried out by the crew of 22, Syrians, Egyptians and Indians. The lifting of detention was decided on Feb 12, but the departure was delayed by 24 hours due to a problem of logistics. Everything is now in order and the ship ready to sail on Feb 15 at 3 p.m. French report with photo: https://www.letelegramme.fr/ille-et-vilaine/saint-malo/taj-une-escale-longue-de-75-jours-14-02-2019-12209273.php

Work going on to address defiencies

Work was currently done aboard the "Taj" in close relation with the ship owner, the flag state Panama and the classification society in charge of monitoring the vessel to address the defiencies regarding non-compliance with the regulations on the safety of ships found during an inspection on Dec 4. The lifting of the detention will be pronounced by the CSN once the situation has been resolved and the guarantees sufficient for the security plan have been presented. In the meantime, the state services remained attentive to the situation of the ship and its crew of about 20 sailors, in association with the association Marine Amitié Partage, which cares for seafarers at the port of call. French report with photo: https://actu.fr/bretagne/saint-malo_35288/le-cargo-taj-bloque-dans-port-saint-malo_20426523.html