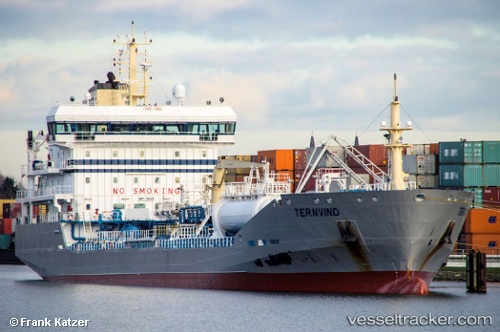 Officials of the marine police Brunsbüttel subjected the "Ternvind" to a special MARPOL control in the oil port Brunsbüttel on Jan 9, 2019, after its arrival from Plymouth at 4.40 a.m. in order to verify the compliance with internationally established standards for the protection of the environment. When checking the maintenance intervals for the wastewater treatment plant, the police found that there had not been enough maintenance of the plant which was very dirty. Furthermore, it was noticedthat important lines of the system were clogged. Samples taken from the waste water tanks gave no evidence of the disinfectant chlorine. Therefore, the officials continued to investigate and found that the tanker had not drained enough disinfected wastewater into the German territorial sea. The officers initiated a fine procedure against the engine operator responsible for the system on board. The Federal Maritime and Hydrographic Agency set a security deposit of 800 Euros. After clarifying the formalities, the ship was allowed to continue at 6.30 p.m. to Hamburg. It berthed at the Kattwyk Oiltanking at 9.40 p.m. the same day.

The "Ternvind" ran aground in Gäveskär north of Brännö in Gothenburg on Feb 10, 2018, at 3 p.m. On the way out of Gothenburg enrlute to Denmark, the ship was hit by a power failure and lost control. The Coastguard was on scene within 30 minutes with a boat and an aircraft to investigate the ship and monitor the situation. There was no indication that oil had leaked out. Personnel of the Transport Agency was on the way to the vessel for inspections. At 4 p.m. the tanker was reflaoted, and at 5.15 p.m. it was anchored off Rivö at Rivöfjorden, surrounded by the patrol boats "KBV 001", "KBV 316", the "Tarntank Teknik" and the "Ternhav". She left the Gothenburg area at 11.30 p.m. and proceeded to Lindoe. She was docked at the Odense Steel Ship Yard Ltd. in the port of Vigerö Yon Feb 11 at 2.15 p.m. for repairs. She sailed again on Feb 23 at 8 a.m., bound for Kaliningrad, ETA Feb 25. Swedish reports with photos: http://www.gp.se/nyheter/g%C3%B6teborg/tankfartyg-p%C3%A5-grund-utanf%C3%B6r-g%C3%B6teborg-1.5162996 https://www.kustbevakningen.se/hallbar-havsmiljo/nyhetsarkiv/grundstotning-i-goteborgs-skargard/

Collision on the Kiel Canal

On Sep 4, 2016, at 5.45 p.m. the container m/v "Langeness", enroute from Bremerhaven to Helsinki, was in collision with the "Ternvind" on the Kiel Canal near the bridge of Rade and got stuck in the embankment. The canal had to be barred for shipping in the Rade-Audorf region. Transiting ships moored in Schülp, Königsförde and Groß-Nordsee. The "Ternvind" was released following a short inspection of the damages. The disabled container m/v remained stuck, being unable to back off with own power, until the tug "Bremerhaven" which had been enroute from Eemshaven and was sailing behind the "Langeness" at the time of the accident and which had offered assistance, pulled the casualty off short before 8 p.m. The "Bremerhaven" then escorted the "Langeness" to Kiel where she berthed at the Voith Quay at 10.30 p.m. and detained for investigations. The "Ternvind" which had been underway from Rotterdam to Kalundborg had berthed at the north jetty in Kiel already at 8.30 p.m. The collision could have been caused by a failed overtaking maneuver of the "Ternvind". The "Langeness" left Kiel at 6.40 p.m., the "Ternvind" at 6.15 p.m., resuming their respective voyages. German reports with photos: http://forum-schiff.de/phpBB3/viewtopic.php?f=2&t=23#p129193 http://forum-schiff.de/phpBB3/viewtopic.php?f=9&t=1377&p=129209#p129209 http://www.kn-online.de/News/Nachrichten-vom-NOK/Rader-Hochbruecke-Frachter-blockierte-Kanal http://www.kn-online.de/News/Nachrichten-vom-NOK/Oeltanker-und-Frachter-liegen-nach-Kollision-auf-dem-Nord-Ostsee-Kanal-fest