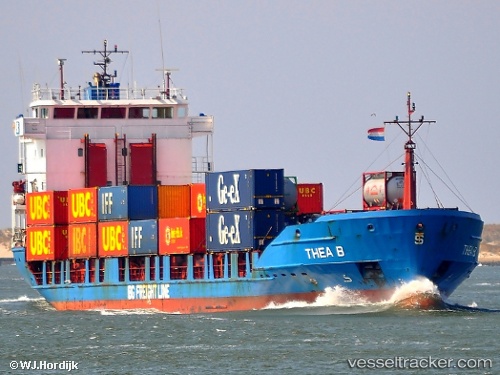 The Marine Accident Investigation Branch has published crounding and recovery of the 'Thea II' and the tug 'Svituer Jospehine' in the approaches to the Humber Estuary. The MAIB saaid in its report that the grounding and recovery of the container vessel and the tug in storm force conditions took place on the evening of Dec 15, 2018. While approaching the Humber pilot station the container feeder vesselsuffered an engine failure and had to anchor to await tugs to tow it into harbour. In storm force conditions, the container vessel dragged its anchor towards the Binks Shoal. Unfortunately, both the 'Thea II' and the tug ran aground before it could be towed clear. Later that night both vessels refloated with the tide. The 'Svitzer Josephine' was able to return to harbour under its own power. After some delays while the ship managers tried to negotiate contractual terms with another tug operator, the 'Thea II' was towed clear of the bank and was eventually towed into Hull two days later. There were no injuries and no pollution. The 'Thea II' dragged its anchor because sufficient chain and/or the second anchor had not been used. The 'Svitzer Josephine' grounded because its master, who was focused on securing the towline to the stricken container vessel and did not have a navigational plan to keep his vessel safe, became disorientated. The delays in the 'Thea II' securing a tow after refloating were due to the manager’s lack of awareness of their vessel’s situation. They eventually approved a tow when the UK Secretary of States representative (SOSREP) threatened to issue direction.RecommendationsA recommendation (2020/128) has been made to the container ship managers to review the company’s emergency response organisation.

Freighter to be drydocked in Hull

The "Thea II", which had suffered a failure of the main engine and steering gear enroute from Amsterdam to Hull with 85 containers on board, on final approach to the entrance of the Humber Estuary, prior to picking up its pilot, will enter drydock for repairs. The ship, as a result of the failure, had run aground on Chequer Shoal, near Spurn Point in position 53 33 48 N, 000 10 36 E, on Dec 15, at 3 p.m. Subsequently the vessel dragged its anchor towards 'The Binks', off Spurn Head, whereby the steering and rudder potentially sustained damage. There was also damage to the poop starboard quarter caused by one of the tugs. The vessel and tugs had to wait until the next high water before refloating and towage could then be resumed utilising alternative tugs as agreed via LOF. On scene were Southeast winds of force 8 with a four metre swell. Drydocking will take place following discharge of the cargo of containers at the King George Dock in Kingston upon Hull. Initially the vessel will be moved to a suitable layby berth in the next day or so, until the drydock is ready in Hull.