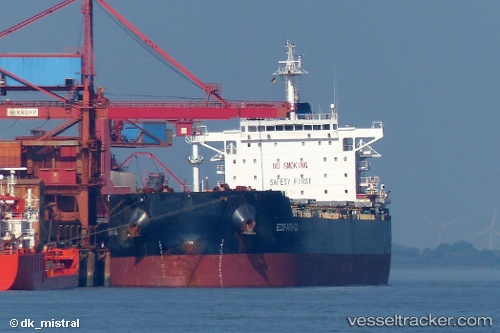 Disabled bulkcarrier under tow to Zhoushan for repairs

The "Ecofaith G.O." was currently under tow from Dasha, where she sailed on Apr 15, 2017, to Zhoushan, by the Alp Maritime tug "Alp Striker"; ETA May 9, for permanent repairs of a breakage of its intermediate shaft while on passage in ballast condition from China to Prince Rupert via South Korea. At the time, it was around 214 miles from Kodiak Island, and 650 miles from Prince Rupert. Due to movement of the shaft the vessel was leaking water into the engine room. Tsavliris, as appointed salvor and its partners/subcontractors Resolve Marine and Alaska Maritime Agencies immediately started making the necessary arrangements, and Foss Maritime’s ice-class, twin-screw tug "Michele Foss" was dispatched to assist. It arrived on site in adverse weather conditions around five days later and established a towage connection the following day. The plan involved towing the disabled vessel to Dutch Harbor for emergency attendance and underwater inspection before continuing with the second leg involving a tow to China for permanent repairs. Prior to commencement of the tow, and under the salvor’s instructions the tail shaft was secured to avoid it turning and to minimise the risk of further water ingress. A Tsavliris salvage team was mobilised from Greece to Dutch Harbor comprising senior salvage master/naval architect and senior salvage engineer. Several days later teams from both Tsavliris and its subcontractor boarded Resolve Marine’s tug "Resolve Pioneer" (IMO: 7528843) at Dutch Harbor to inspect the "Ecofaith G.O." as per USCG requirements. The following day they rendezvoused with the convoy where it was established there was neither any water pumping out activity nor signs of pollution. The convoy arrived safely at Board Bay the next day where the ship was secured to the emergency mooring buoy with assistance from two port tugs and a mooring boat allowing the salvage team to inspect the engine room. It was established the temporary repairs had been carried out satisfactorily, the shaft well secured and the water ingress rate stable. Divers started plugging and sealing the stern tube while engineers took measurements for fabrication of steel plates and stiffeners in order to secure the shafting system in place. The vessel was then moved to an alongside berth allowing salvors to continue to prepare the vessel for onward tow to China. Temporary repairs to the shafting continued and once divers completed sealing the stern tube the integrity was tested by ballasting the ship, a towing bracket was also fitted on the forecastle. Finally, 20 days after first involvement, salvage services were terminated and Tsavliris handed the ship back to its owners and the tow to China commenced.

The "Ecofaith G.O." was towed to Broad Bay in Unalaska on March 11, 2017, after the bulk carrier lost propulsion last month on its way to Prince Rupert in ballast and with a crew of 20 on board. It was unclear why the Greek ship stalled in international waters. It was not an emergency towing situation. After the U.S. Coast Guard was notified, preparations were started to have the tug "Michelle Foss" come from Seattle and bring them in to Dutch Harbor. The local salvage vessel "Resolve Pioneer" met the convoy near Unimak Pass and escorted them to the emergency mooring station in Broad Bay. The Resolve Magone Marine was now examining the "Ecofaith G.O." at the semergency mooring station in Broad Bay. The salvage company will make short-term fixes to the bulk carrier before it may continue to its next destination for permanent repairs. They carried some diving and assessments on the vessel to figure out what repairs were needed to make to get it safely to China. The DEC and the Coast Guard were monitoring for pollution. So far, responders have seen no sign of an oil sheen. Report with photo: http://kucb.org/post/stalled-bulk-carrier-towed-unalaska-repairs