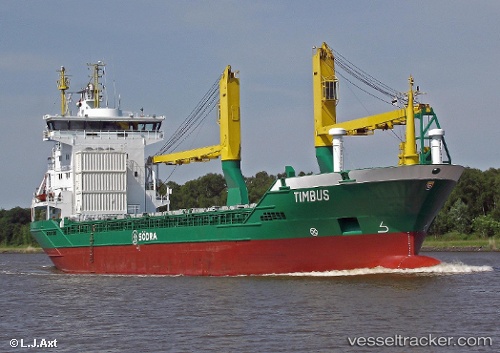 En route from Pasajes to Södra Monsteras the 'Timbus' allided with a gate of the locks of the Kiel Canal in Kiel-Holtenau upon leaving the lock eastbound on Jan 12, 2020, at 6.40 p.m. The ship slammed into the gate by yet unknown reasons and caused some damage with its bulbous bow which was investigated at the Lindenau-Yard. On Jan 13 at 1 a.m. the vessel was allowed to continue the voyage with an ETA in the Swedish port as of 11 p.m. It berthed at the Monsteras Port Jatterson on Jan 14 at 6.20 a.m. The steel plates of the lock gate have been damaged in the impact, but the gate remained operating.

The "Timbus" suffered engine damage enroute from Varberg, where she had sailed on Nov 24, to Flushing in the Northsea on Nov 26, 2017 at 3 a.m. A deflagration in a cylinder of the main engine had caused an engine room fire. Although this could be extinguished by the crew, the ship lost the main power supply due to the associated failure of the wave generator and had to drop anchor off Terschelling in the afternoon, about 20 miles off the coast. The Dutch tug "Viking" (IMO: 9431903) was dispatched from Delfzijl around midday in order to tow the ship to Emden. The "Timbus" berthed at the Industry Quay on Nov 27 at 6.30 p.m. where an investigation was launched and the ship detained until the seaworthyness was restored. The ship left Emden again on Dec 16 at 1.50 p.m., bound to Bremerhaven, ETA Dec 17.