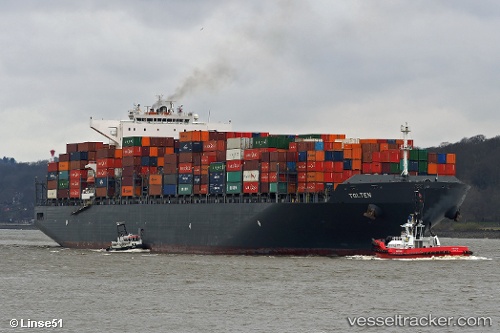 Captain of Tolten responsible for allision in Karachi

An initial investigation report on the allision of the "Tolten" with the "Hamburg Bay" held the captain of the ship responsible for the incident. The "Tolten", which was carrying transit-containers, collided with the "Hamburg Bay"near the South Asia Port Terminal Limited (SAPT) berth on March 19. At least 21 containers fell into the sea because of the collision. The sunken containers were carrying imported cars and freight worth millions of rupees. The ship's recording revealed that the captain did not issue any directives to prevent the collision. His delayed response was the reason behind the incident. It also said that the ship's reverse gear did not work at the time of the allision, adding that the ship should have been stopped within two minutes but it kept running till two minutes forty seconds. The accident happened because of the captain's inability to halt the speed of the ship. The report further said that the accident could have been avoided if the Karachi Port had more powerful tugs. It should have three tugs, not two. The "Tolten" which had sailed from Karachi on March 30 entered the Dubai Dry Dock on Apr 8 after calls at Munda, Nhava Sheva and Jebel Ali for repairs of the damage suffered. The ship left the yard again on Apr 25 at 7 a.m. and dropped anchor off Dubai in pos. N 25° 22.14' E 055° 4.94'.

The "Tolten" which had allided with the "Hamburg Bay" at the Pakistan Deep Water Container Port near Karachi on March 19, left the berth at the South Asia Pakistan Terminal Limited on March 39 and headed to the Nhava Sheva International Container Terminal, where she arrived on Apr 1.

At least 10 containers of the "Tolten" were retrieved by March 21 as Karachi Port Trust (KPT) authorities continued the operation to recover the containers that fell into the sea after the collision with the "Hamburg Bay" near the South Asia Port Terminal Limited (SAPT) berth. While the "Tolten" remained docked at the Karachi Port, the "Hamburg Bay" departed after receiving channel clearance. The authorities are facing difficulties in retrieving three containers that have deeply sunken into the sea. On March 20 the divers had tied ropes around 12 containers which were to be taken out with the help of a crane on March 21. The recovery operation was likely to span over a period of two to three days, following which the SAPT will open for traffic. Operations at the SAPT, which were suspended after the accident, have resumed after the removal of containers from the sea. On March 22 the vessel wasn shifted to a non-functional berth at South Asia Pakistan Terminal Limited (SAPTL) near Karachi port. A final report from the surveyor is awaited for necessary repairs, if any, and to meet other formalities.