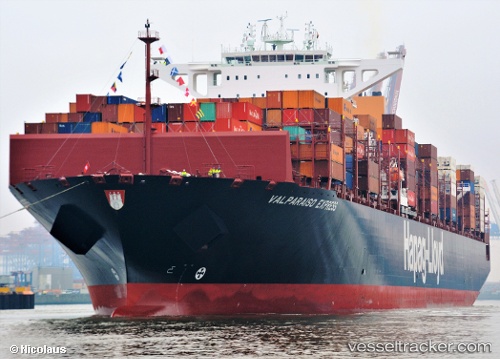 The Panama Canal welcomed the largest capacity vessel to-date to transit the Expanded Locks-Hapag-Lloyd's Valparaiso Express. The 10,589 TEU Neopanamax containership was specifically built to take advantage of the greater capacity offered by the Expanded Panama Canal. The new locks, which are 70 feet wider and 18 feet deeper than those in the original Canal, are able to accommodate Neopanamax vessels carrying up to 13,000 to 14,000 TEUS. The vessel began its transit at the Pacific-facing Cocoli Locks this morning, following calls at ports in Chile, Peru, Ecuador and Colombia. After completing its transit through the Atlantic-facing Agua Clara Locks, the ship will stop iat Manzanillo International Terminal in Panama and will continue its route to terminals in the Dominican Republic, United Kingdom, Germany, Belgium, France and the Netherlands. The Valparaíso Express is part of Hapag-Lloyd's Europe - South America West Coast service, which covers a nine-week rotation, merging two previous services between Northern Europe and the West Coast of South America. The containership measures 333 meters in length and 48 meters in width, and is the first of five new vessels in Hapag Lloyd's new 10,500 TEU class which are specifically being built to take advantage of the additional capacity the Expanded Canal affords. When the final four ships are completed in April 2017, all five will be able to transit the Expanded Canal. http://en.portnews.ru/news/231608/

Hapag Lloyd recently completed the acquisition of 5,750 new refrigerated containers, equipped with the highest technology available on the market, of which almost the total was already shipped on the new vessel "Valparaíso Express" that sailed from the port of Qingdao, China , To Chile where they will be released. According to the shipping company, the new ship, which also makes its debut en route, and the modern containers, would arrive in Valparaiso in the first days of December, just in time to support the fruit season. The reception of a ship with 5,000 of these new boxes, was described by Hapag Lloyd as "an unprecedented fact in the industry and probably will not be seen again in decades." High technology Hapag Lloyd, detailed that it is 5,000 containers of 40 feet High Cube and 750 of 20 feet. Of these, 1,000 have controlled atmosphere technology, designed to meet the growing demand for certain fruits that need this system to extend its useful life, preserve quality and increase the coverage of its marketing. Nearly 5,000 of the new containers were shipped late last week at the port of Quingdao, China, to Chile aboard the "Valparaíso Express", which began its voyage to the Chilean port of Valparaíso on November 5. The ship, whose construction was recently completed at the Hyundai Samho Heavy Industries shipyard in South Korea, has a capacity of 10,500 TEUs and 2,100 refrigerated container plugs and was purchased by Hapag Lloyd to pay special attention to the fruit season in America from the south. http://www.mundomaritimo.cl/noticias/hapag-lloyd-prepara-historico-estreno-de-contenedores-refrigerados-en-chile