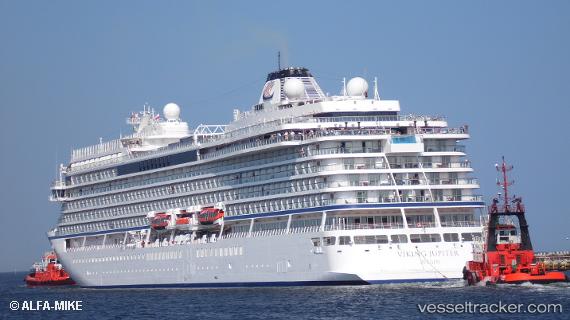 The 'Viking Jupiter' called at Mar de Plata del on March 14, 2022, for a health emergency among one of the 200 passengers. The ship did not enter the port and continued its journey from Puerto Madryn to Montevideo after the patient was transferred to shore with a Gitán boat. The 75 year old passenger had respiratory distress due to pneumonia, with a negative Covid test and had to be transferred to the Private Community Hospital (HPC). Along with the passenger, her companion and two nurses were disembarked from the ship.

On Sep 28, 2021, Salvamento Marítimo was requested for the medical evacuation of a sick American woman and her husband from the 'Viking Jupiter' 25 nautical miles south of Alicante. The cruise was en route from Malaga to Valencia. The CCS Valencia mobilized the Helimer 211 helicopter,, which hoisted both and took them to the Alicante airport, where the woman was transferred to the hospital. Video: https://twitter.com/i/status/1442807216059338760

Engine trouble on the Thames

On July 2, 2019, the "Viking Jupiter" went alongside the Tilbury Landing Stage, London, to where she was towed after suffering a mechanical failure in the Thames Estuary while being outward bound from Greenwich. The ship had sailed from London at 2.50 a.m. It dropped anchor, and two Svitzer tugs were called to assist the ship back to port as a repair on sea was impossible. It left Tilbury again after troubleshooting on July 4 at 2 a.m. and headed to Honningsvåg where she arrived on July 8 at noon. Photo: http://www.shipspotting.com/gallery/photo.php?lid=3024087