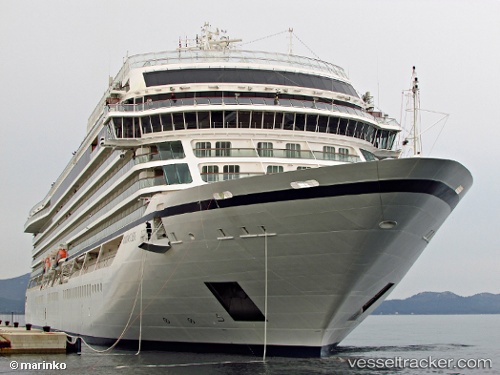 The 'Viking Sea' broke off her moorings in the port of Ravenna in the morning of Sep 17, 2022, in stormy weather with wind in gusts of 150 km/h. Five tugs responded to the incident, and it took them about four hours to get ship under control and keep it in stable position, avoiding a grounding or allision. The ship returned to the Cruise Terminal in the afternoon, with all 870 passengers on board. Nobody was injured. Once the weather conditions permitted, the ship left the port of Ravenna at 8.50 p.m. en route to Corfu with an ETA as of Sep 20. Reports with photos: https://portalcruceros.cl/viking-sea-con-800-pasajeros-a-bordo-rompe-amarras-en-italia/ https://newsprima.it/cronaca/vento-nave-crociera-viking-sera-rompe-ormeggi-ravenna/#gallery-1-foto-2

The Centers for Disease Control and Prevention was investigating an outbreak of gastrointestinal illness on the 'Viking Sea'. 114 out of 640 passengers and four crew members out of 404 on board the ship reported diarrhea caused by an unknown agent. Those totals do not reflect any symptoms that emerged after disembarkation. The transatlantic cruise embarked from Barcelona on Nov. 29, 2021, and spent two weeks visiting cities in Spain, Portugal, Morocco and St. Maarten before ending its voyage in San Juan, Puerto Rico, on Dec 13. As a result of the outbreak, the 'Viking Sea' has increased cleaning and disinfection protocol according to the ship's "outbreak prevention and response plan" and also collected stool specimens from passengers and crew that have been sent for testing. The ship sent daily reports of the cases on board to the CDC's Vessel Sanitation Program, which works to assist the cruise ship industry to prevent and control the introduction, transmission and spread of GI illness on cruise ships. The VSP was monitoring the outbreak response and sanitation practices. The 'Viking Sea' is currently en route to Barbados on a round trip cruise that departed from San Juan on Dec 14.