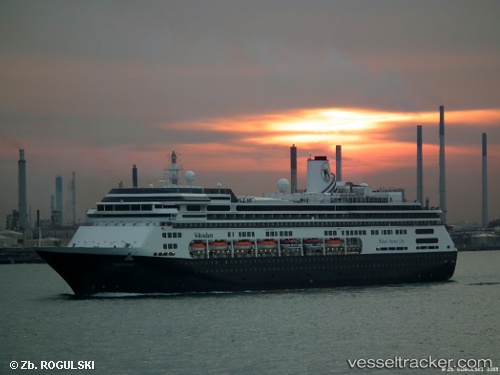 The Piraeus Port Authority was informed in the morning hours of Oct 5, 2022, by the Master of the 'Volendam' about the death of a 68-year-old passenger on board. The Central Port Authority of Piraeus, which conducted the preliminary investigation, ordered an autopsy to be carried out at the Forensic Service of Piraeus.

The 'Volendam' berthed in Rotterdam on April 2, 2022, and will be used to accommodate refugees as part of an agreement announced by Netherlands and City of Rotterdam government officials. The ship docked at Merwehaven on the north side of the River Maas in Rotterdam, for three months to provide a temporary home for approximately 1,500 refugees. Under the agreement to charter Volendam, Holland America Line will provide three hot meals per day, private stateroom accommodations, housekeeping services, use of public spaces, fitness facilities, internet access and other necessities. Volendam will be staffed with approximately 650 crew members. The ship will remained docked to ensure Ukrainian families can transit easily to and from services in Rotterdam. The 'Volendam' was scheduled to return to service May 15, with voyages from Rotterdam to Norway, the British Isles and Iceland. To accommodate the three-month commitment, Holland America Line will cancel three of those voyages and resume service on July 3 instead. Guests on canceled cruises are being notified today and will be accommodated on similar itineraries.

The 'Volendam' which sailed from Cape Town bound for South East Asia with only crew on board, diverted in the direction of Durban on May 18, 2020. A 26-year old New Zealand crewman was suffering a medical complaint that required urgent hospital care. At 10 a.m. the NSRI Station Durban, together with Netcare 911 rescue paramedics, launched the 'Alick Rennie' and rendezvoused with the cruise ship as it approached Durban. The ship had already left the shores of Africa behind when the medical crisis reached a point where the WC Government Health EMS duty doctor, in communication with the ship’s medical crew, decided that the patient required hospital care as soon as possible. The NSRI rescue craft rendezvoused with the vessel three miles offshore where an NSRI rescue swimmer and a Netcare 911 rescue paramedic boarded the ship. The paramedic took over care of the patient from the ship’s medical crew and the patient was transferred onto the sea rescue craft without incident. In a stable condition and in the care of the paramedic, the patient was taken to the NSRI Durban sea rescue base from where he was transported by ambulance to hospital. The NSRI said all Covid-19 precautions and protocols were observed during the operation.