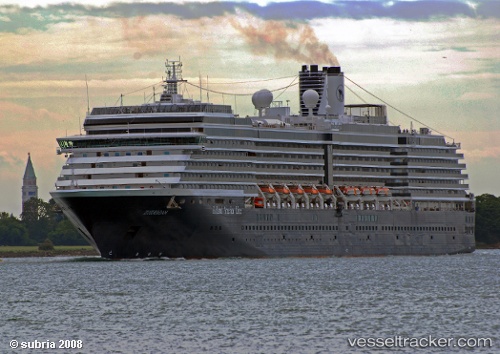 The US Coast Guard medevaced a passenger of the 'Zuiderdam' in the Lynn Canal, approximately 30 miles northwest of Juneau, Alaska, in the evening of Sep 17, 2022. Watchstanders from the Coast Guard Sector Juneau command center received the initial request for the medevac on Sep 16 at 8:50 p.m. from staff aboard the cruise ship , reporting that the passenger was experiencing medical complications. The medical team aboard the vessel was able to stabilize the man as the ship transited to the rendezvous point. A Coast Guard Air Station Sitka MH-60 Jayhawk helicopter arrived on scene at 11:13 p.m., hoisted the 73-year-old man, and transported him to an awaiting Lifemed aircrew in Juneau for further transport.

The US Coast Guard medevaced a woman from the 'Zuiderdam' in Cross Sound, Alaska, on Aug 21, 2022. Sector Juneau command center watchstanders received a call from the medical officer aboard the cruise ship at approximately 5:00 p.m. requesting medevac of a 65-year-old female passenger experiencing loss of vision. Watchstanders coordinated the launch of an Air Station Sitka MH-60 Jayhawk helicopter crew to assist. The Jayhawk crew arrived on scene at 7:30 p.m., but was unable to conduct a hoist due to a dense marine layer that reduced visibility to an unsafe level. Sector watchstanders assisted in coordinating an updated rendezvous location in Sitka Sound where conditions had improved. At 10:06 p.m., the Jayhawk crew conducted the hoist at the rendezvous location and safety transferred her to awaiting emergency medical services personnel in Sitka. The passenger was last reported in stable condition. On-scene conditions were 4-foot seas and 12 mph winds.

On Pentecost, so-called activists have blocked the "Zuiderdam" in Kiel for six hours. After a major police operation, 46 people were taken into custody. 12 of them remained behind bars on June 10. A large contingent of police and fire brigade ended the protest at 10 p.m. The group which called itself "Smash Cruiseshit" occupied a construction site crane at the quay in the afternoon. The activists blocked access to the bollards and crossed with small boats in front of the bow of the ship. The "Berlin" of the DGzRS had to attend to ensure no one was in danger. Some people climbed on the bulge and mooring lines. The activists held up banners. The so-called activists refused to contact the forces. The meeting was ended by the Assembly Authority of the City of Kiel. The police called on the demonstrators to leave the wharf, but they refused. Several of them continued in small boats and on the bulbours bow of the vessel. Shortly after 9 p.m., the police came with several boats and ended the blockade. 41 people were provisionally arrested. However, some of the protesters were able to free themselves and fled. In addition, five climbed onto a crane. Two of them refused to come down were roped off by the Federal Police and the fire brigade. A total of 46 arrested were released from custody during the night. Twelve of them were arrested a short time later, as they had not complied. In the morning of June 10 the police still held the 12 people for measures to clarify the identity of those who had no identity documents and did not want to give any information. Criminal proceedings on suspicion of coercion, resistance and trespassing were initiated. The "Zuiderdam" sailed at 9.50 p.m. and headed to Copenhagen, escorted by several boats of the water police to Strande bay. By sailing faster the ship could cope up with the deiay. German report with photos: https://www.kn-online.de/Kiel/Strafverfahren-gegen-Klimaaktivisten-nach-Kreuzfahrtschiff-Blockade-in-Kiel https://www.kn-online.de/Kiel/Kreuzfahrtschiff-Zuiderdam-holt-nach-Blockade-in-Kiel-Verspaetung-auf https://forum-schiff.de/phpBB3/viewtopic.php?f=9&t=1377&p=160323#p160310