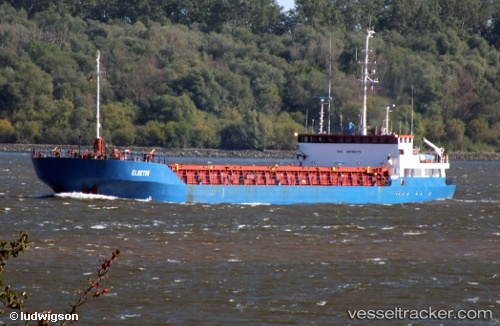 On Jan 14 at 9.45 a.m. the "Elbetor" moored off Great Yarmouth. The ship had been anchored just east of Bacton until 3 a.m. before making its way to Yarmouth. 12 firefighters - six from Humberside and six from Caernarfon, North Wales - had joined the Humberside fire liaison officer to carry out hot spot checks and damp down the vessel. The lifeboat crew, with the 12 firefighters on board, arrived back in Cromer on Jan 13 at about 4 p.m. Report with photos and video: http://www.edp24.co.uk/news/boat_off_cromer_finally_safe_and_able_to_continue_its_journey_after_day_long_drama_out_at_sea_1_4377206 https://www.youtube.com/watch?feature=youtu.be&v=YS2Si0vPiB4&app=desktop

Firefighters have been tackling a fire in the accommodation block of a cargo ship six miles off the Norfolk coast. Two coastguard helicopters, a lifeboat from Cromer and two other vessels went to the aid of the crew of the Elbetor which was heading for Rotterdam with a load of wheat. There are no reports that anyone has been injured and so far the vessel has not been evacuated. A six-person fire team from Humberside was airlifted to the ship and are helping the crew tackle fire hotspots. There were seven crew members on board the Elbetor. The accommodation area was heavily smoke damaged. It's thought the vessel will head to the port of Great Yarmouth under its own power. http://www.itv.com/news/anglia/2016-01-13/cargo-ship-heading-to-port-after-fire-off-norfolk-coast/