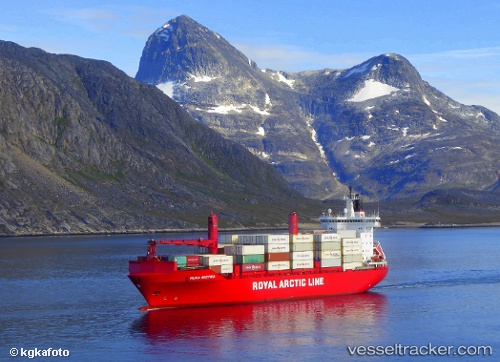 The scheduled supply trip of the "Nuka Arctica" has been delayed after a fire in the engine room after the departure from Aalborg on Nov 16, 2016. The crew managed fighters to extinguish the fire. The ship could proceed at reduced speed to Frederikshavn. It reached the port of Frederikshavn on Nov 19 and berthed at the Andels Quay at 3 p.m. for repairs. There has been no damage to the cargo. Spare parts and other equipment were already on the way and the ship was expected to sail on after a stay of 24 hours. She left the port of Frederikshavn on Nov 20 at 2.30 p.m. after repair of the fire damage and resumed the voyage to Nuuk, ETA Nov 27. The delay of about four days are expected to be obtained during the upcoming trips, so the vessel was expected to be back in the normal schedule in early December.

The "Nuka Arctica" which is already delayed because of high winds and icing, sailed from Nuuk to Sisimiut on Mar 10. During the night the ship got stuck in ice off the mouth of Kangerlussuaq. On Mar 11 the ship managed to get free and call at Sisimiut. The Navy patrol vessel HDMS "Triton", which stayed in the Nuuk area, rendezvoused with the vessel in the morning and may assist if the ice caused further problems. It can be done when Triton has better opportunity to sail in and break the ice, and that the vessel helicopter can be used to find navigable channels in the ice. Also the "Arina Arctica" was a day late due to strong winds in southern Greenland.

The "Nuka Artica" on Feb 11, 2015, at noon sought refuge in Reykvavik. The ship was first delayed because of bad weather with strong winds in the Atlantic on the way to Greenland and subsequently was hit by technical problems. The ship had to wait for spare parts in Reykjavik for the necessary repairs, before sailing further to Nuuk, ETA Feb 16, and Sisimiut.