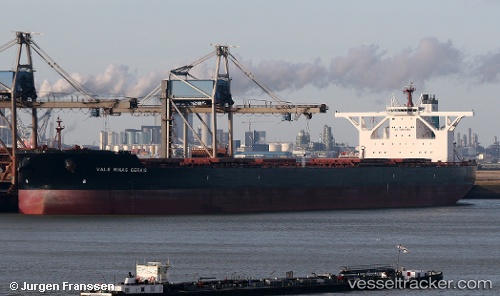 On June 11, 2019, at 10.40 p.m. the mooring lines of the "Shandong Da Zhi" broke in Ponta da Madeira, and the bulkcarrier allided with the foreship of the "Pacific Opal". The ore carrier was berthed at Pier IV North at Ponta da Madeira Terminal, upon completion of loading operations, and the "Pacific Opal" was in the berthing process at Pier IV South of the same Terminal. The "Shandong Da Zhi" was carried backwards by the currents and slammed into the arriving ship. Tugs were requested to assist the bulk ore carrier to avoid further movements at the berth. A pilot boarded the vessel for the unberthing it. The "Pacific Opal" left the Ponta da Madeira Terminal the next morning and moored on the Ponta da Madeira Inner Anchorage, Sao Luiz Anchorage Area, awaiting damage assessment. The "Shandong Da Zhi" was also moored in the Sao Luiz Anchorage Area, awaiting inspections. The cause of the incident was being investigated.

The Vale Minas Gerais, the world's largest iron-ore carrier, docked for the first time at the Port of Villanueva in the Philippines, the company said in a statement. Rio de Janeiro-based Vale, the world's No. 2 mining company, said the Singapore-flagged Vale Minas Gerais is on its maiden voyage. Ore from the 400,000 deadweight-ton "Valemax" vessel, which is bigger than three standard soccer fields laid end to end, was received by Japan's JFE Steel which has a sintering plant at the port.