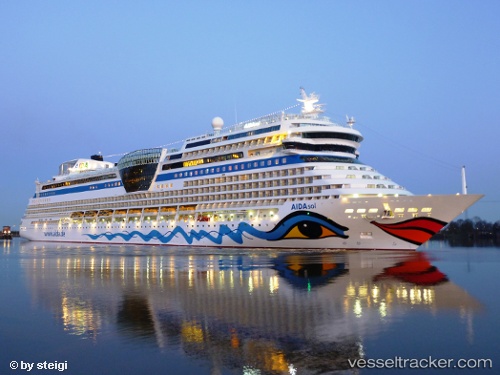 The 'Aidasol', upon leaving the port of Santa Cruz de La Palma, requested the medevac of a passenger with a dislocated kneecap in the afternoon of Nov 17, 2022. The CCS Tenerife of Salvamento Marítimo mobilized the SAR boat 'Salvamar Alphard' to the scne, which picked up the patient, a German man and his wife, and transfered them back to the port for further care.

On Sep 7, 2021, a passenger of the ' Aidasol'needed to be nedevaced just as the ship had departed from Stockholm at 5 p.m. on a 7- days-cruise from and to Warnemünde. As the ship was within the narrows of the archipelago, it was decided to disembark the patient with a tender boat. The ship was stopped and turned into the wind to safely launch the boat. The patient was disembarked at Stenslätten and handed over to medical personnel.

On April 24, 2021, the 'Aidasol' berthed in Rostock-Warnemünde to test the shore power supply facility which was built by the Siemens Group in the area of berths 7 and 8. The commissioning and test phase has been delayed by a few months due to the corona pandemic. This was originally planned for early autumn 2020 in Rostock. The shore power system is technically designed to supply up to two modern cruise ships at the same time. The city, the state of Mecklenburg-Western Pomerania, and the port of Rostock jointly invested around 19 million Euros in the entire complex in Warnemünde. Stadtwerke Rostock Netzgesellschaft provides the technical supply and the grid connection. According to official information, the new system can deliver up to 20 MVA of electrical energy. The complex system tests with the new supply station are scheduled for the end of the week.