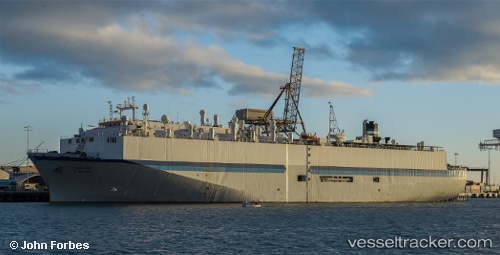 The 'Al Messilah' will leave Australian waters later this week or early next week, after about 24 crew members were cleared of COVID-19 by State health officials. The vessel had arrived in Fremantle on Oct 14, and has been moored there ever since while 36 crew members were put into hotel quarantine after COVID-19 was detected onboard. One crew member was admitted to hospital briefly, but none of the infected crew showed severe symptoms of the virus and all were in good health as of last week. Two Australians were allowed off the ship to quarantine at home, a local stockwoman from Busselton and an Australian accredited veterinarian from Sydney, after being on board for about eight months because they could not disembark at any international port due to restrictions on the movement of personnel. A skeleton crew stayed onboard while moored to oversee the daily maintenance of the vessel and prepare it for the next consignment. The 'Al Messilah' was due to take up the next available berth at Fremantle and be loaded with about 60,000 sheep and 200 cattle destined for the Persian Gulf.

The WA Premier has conceded he has known since the weekend that two Australians were allowed to disembarkfrom the 'Al Messilah' at Fremantle before a COVID-19 outbreak was detected on board. A vet from Sydney and a stock manager from Busselton in WA's South West had been on the livestock carrier for up to eight months when it docked at Fremantle last week. The pair disembarked the ship and were allowed to go home to quarantine before 25 cases of COVID-19 on board were discovered. When the ship berthed in accordance with existing protocols, they got off and went back to where they were from to quarantine. The ship itself had not at that point in time recorded or reported any COVID and obviously had been at sea for a long period of time. The revelation came as 36 crew members from the 'Al Messilah', including the additional 24 who tested positive for COVID-19 on Oct 19, were taken off the vessel and moved to hotel quarantine in Perth.

Two crew members on separate ships in Western Australia have tested positive for COVID-19, with a crew member aboard the 'Al Messilah', which has docked in Fremantle since Sep 14, 2020, becoming the state's latest coronavirus case. The other positive crew member was from the 'Key Integrity', docked in Geraldton. The crew member from the livestock carrier was taken to Fiona Stanley Hospital for another condition and was tested for COVID-19 as a precaution, but returned a positive result. He was transported to hospital in a charter bus along with crew members from three other vessels. All crew members in the bus were wearing personal protective equipment at the time. About 52 crew members from a number of countries are believed to be on board the Al Messilah', which was scheduled to be loading stock but has now been delayed. A pilot who boarded the vessel was isolating, and health authorities were investigating whether an inspection crew boarded the ship. Another 24 crew members on the a livestock carrier have since tested positive for coronavirus, as a move to phase 5 of eased COVID-19 restrictions has again been delayed in the state. The other COVID-19 case — a crew member on board the 'Key Integrity' at Geraldton Port — remains on the ship. The crew member has remained safely isolated". The man has since recovered from COVID-19, but the captain had kept him isolated in his cabin.