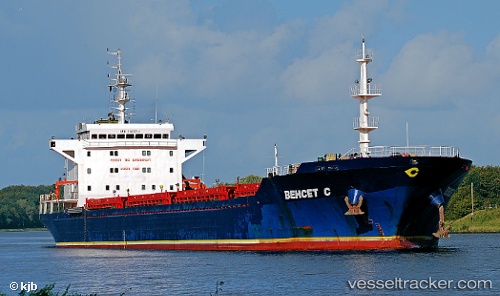 The 'Behcet C', en route from Istanbul, suffered a blackout in the Canale dei Petroli, Venice, while proceeding to Marghera port with a pilot on board and two tugs as assistance in the morning of Sep 29, 2021. The ship veered to starboard side and ran into a group of dolphins at the canal edge. The tugs managed to turn the bow around before the ship ran agrond. Both anchors were dropped, and the tugs worked full power to pull the ship back into the fairway. The crew managed to restore power and restarted the engine. The 'Behcet C' berthed at the Venice Commercial Terminals in Marghera at 7.10 a.m., about an hour after the incident. Video: https://www.youtube.com/watch?v=ZHO8haSxYZc&t=65s

The "Behcet C" unmoored from the Bominflot Quay in Kiel after cleaning of the fuel system and removal of contaminated oil from tanks, lines and fuel injectors was completed and the class removed on Sep 19 at 8.20 p.m. One hour later the ship passed the new locks in Kiel-Holtenau eastbound.

Ship adrift in the Baltic Sea due to contaminated oil

On Sep 16, 2011, the "Behcet C" berthed at the Bominflot Quay in Kiel. Coming from Baltiysk, the engine had several times failed on the trip from the Gulf of Gdansk to Kiel, so that it took almost an entire week. The ship went adrift off Ruegen, Fehmarn and most recently, in the night of Sep 16 between Fehmarn and Kiel Lighthouse. Before finally entering the Kiel Canal the ship was ordered to anchor off Kiel-Holtenau from where tugs pulled the cargo ship through the canal locks to the berth within the canal at Kiel-Wik where the water police boarded the ship for investigations. At the bunker station of Bominflot now the fuel system of the ship is cleaned. Contaminated oil must be removed from tanks, lines and injectors. According to initial findings the fuel was so polluted that it contaminated the fuel injectors. Before the ship may proceed, the classification society will have to renew the class of the ship. German report with photos: http://www.kn-online.de/lokales/kiel/251586-Schiff-brauchte-eine-Woche-von-Danzig-nach-Kiel.html