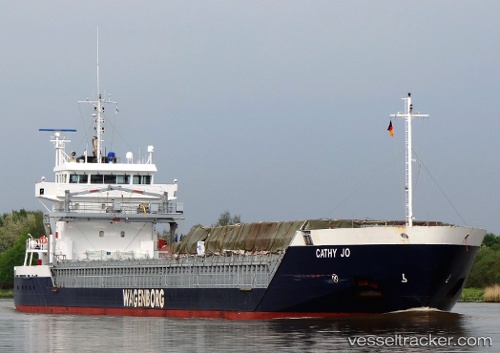 Repairs to take a few days

A technician from the Dutch company Wagenborg arrived in Brest in the morning of May 13 to investigate the spare parts needed for the repair of the "Cathy Jo". The repair will be done by the company and will take a few days. It was found out that a leak on the injection system had caused the fire and damaged the turbine of the Mak engine of 2,640 kW on the Ouessant TSS, 150 km west of Penmarc'h. The crew had managed to control the fire, and the tug "Abeille Bourbon" had towed the "Cathy Jo" to port at 4:45 p.m. She left Brest again on June 2 at 1.15 p.m. and resumed the voyage to Szczecin. French report with photo: https://www.ouest-france.fr/bretagne/brest-29200/apres-l-incendie-le-cargo-cathy-jo-en-reparation-brest-6348222

In the morning of May 12, 2019, the "Cathy Jo" with a crew of eight on board suffered an engine failure following a fire in the engine room in the Bay of Biscay, 83 miles west of Penmarc'h. The MRCC Corsen sent two technicians and a six firefighters to the drifting ship aboard a Cayman-helicopter which was deployed from the naval base in Brest. The fire was extinguished, but the ship was in need of towage. The emergency tug "Abeille Bourbon" (IMO: 9308687) was contracted for towage and sailed from Brest at noon. The ships arrived at Brest early on May 13, and the casualty was berthed at the Quay de l'Est at 5.25 a.m. The ship, loaded with 5.400 tons of soda, was en route from Istanbul to Szczecin. French report with photo: https://www.premar-atlantique.gouv.fr/communiques-presse/assistance-au-cargo-cathy-jo-en-difficulte-au-large-de-la-pointe-de-penmarc-h-29

The "Cathy Jo" ran aground with a cargo of calcium 350 meters off Stevns on Jan 8, 2015, after having sailed from Stevns Pier in the morning. The vessel, which had lost power was pushed ashore by strong winds. After first attempts on the same day had failed, t was finally refloated with the help of the tug "Sea Alfa" supported by an extraordinary high tide on Jan 9. It was examined for damage by divers after having anchored off Køge, to where it had been escorted by Danish naval ships, before resuming its voyage to Kemi with an ETA of Jan 13.