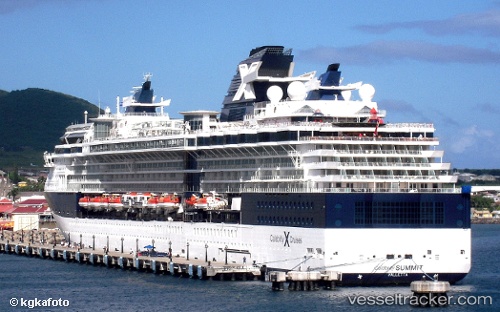 Two crew members of the 'Celebrity Summit'jumped from the ship on Oct 1, 2019. Canadian fire-rescue and Coastguard departments rescued them both from the Saint Lawrence River in Quebec City. A 27 year old man first jumped into the river from the cruise ship, which had been moored at the Port of Quebec since Sep 30. The incident occurred around 5:40 a.m., and the crew member was sighted by patrolmen from the Port of Quebec near the cruise terminal. A patrol officer went down the quay ladder and rescued the man. The temperature of the river was reportedly about 13° celsius and the crew member was hypothermic when rescued. The Canadian Coast Guard rescued the second crew member, a 36 year old man, around 7 a.m. after he drifted with the current around five kilometers down the river. He also suffered from hypothermia. Both men were taken to the hospital after they were rescued. The men were believed to be from Zimbabwe and the United Arab Emirates. It was believed that they may have attempted to immigrate into Canada illegally. The ship left Quebec City in the afternoon of Oct 1. It is unknown whether the cruise line returned the employees to the ship or whether the men remained in the hospital with the intention of flying them back to their respetcive counties when they were released from medical care. Report with photos: https://www.cruiselawnews.com/2019/10/articles/rescue/two-crew-members-jump-fom-celebrity-summit-into-saint-lawrence-river/

A US Coast Guard helicopter crew flew to the rescue for a 7-year-old girl aboard the "Celebrity Summit" on July 9, 2019, medevacing her to a hospital in Virginia for higher level care. The cruise ship had contacted the Coast Guard to request assistance with a girl who was experiencing abdominal pain while enroute from New Jersey to Bermuda. The 5th District flight surgeon determined that she needed a medical evacuation and the command center dispatched an MH-60 Jayhawk helicopter from Coast Guard Air Station Elizabeth City, North Carolina. The girl, a parent and ship’s nurse were transported to the Children’s Hospital of The King’s Daughters in Norfolk.

The US Coast Guard coordinated the medevac of a 61-year-old woman, from the "Celebrity Summit" who was suffering from chest pains in New York in the afternoon of May 26, 2019. Watchstanders at the Coast Guard Sector New York command center received notification at approximately 4:20 p.m., stating the woman needed medical attention aboard the cruise ship. The Coast Guard command center coordinated with the New York City Fire Department to safely remove the passenger. A Coast Guard flight surgeon determined that a Coast Guard Station New York 45-foot Response Boat-Medium rescue crew was the best option for an evacuation. At approximately 4:40 p.m., the passenger was transferred from the cruise ship and taken to awaiting emergency medical services at Station New York for transfer to Staten Island University Hospital. The individual’s current medical condition is unknown.