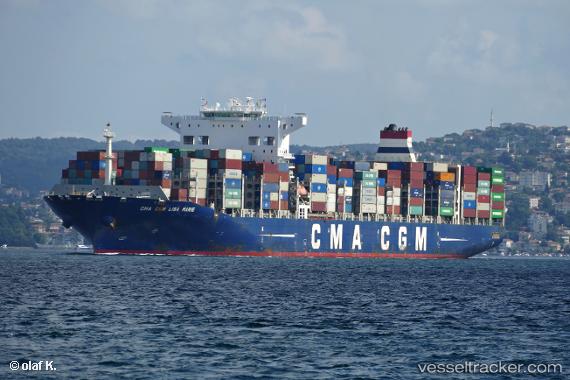 The fire in one of the containers of the 'CMA CGM Lisa Marie' in position 06 13 01 N, 095 23 03 E, was suspected to have been caused by a short circuit. Three-fourths of the container was burned, but the crew was able to extinguish it by themselves. After being monitored by the National Search and Rescue Agency and the Directorate General of Sea Transportation (Ministry of Transportation), the vessel has been deemed safe and was allowed to sail to Port Klang.

The 'CMA CGM Lisa Marie' suffered a cargo fire on April 15, 2022, at 6.25 p.m. UTC about 35 nautical miles north of Banda Aceh in the Andaman Sea. The ship reduced its speed to 1-2 knots but returned to 16 knots at 8.30 p.m. The ship was en route from Jeddah to Port Klang with an ETA as of April 18. It changed course and headed for Banda Aceh in order to get firefighting assistance. The crew managed to extinguish fire by own means, A Banda Aceh SAR boat and tug, as a precaution, poured water on the containers at the fire site, to cool them down. The 'CMA CGM Lisa Marie' then resumed the voyage.

The "CMA CGM Lisa Marie" suffered engine failure during sea trials on Sep 20, 2017, about 130 miles east of Shanghai, with 164 people on board, mostly belinging to the Zhoushan Xinya Shipyard. The ship was caught in adverse weather with wave heights of up to 6,4 meters. The Chinese SAR ship "Dong Hai Jiu 117 (IMO: 9682631) was sent to assist and managed to take the disabled vessel in tow. The casualty was pulled back to the yard in Liuheng on Sep 23 at 9.a.m. Photo: http://maritimebulletin.net/wp-content/uploads/2017/09/lisamarie1.jpg