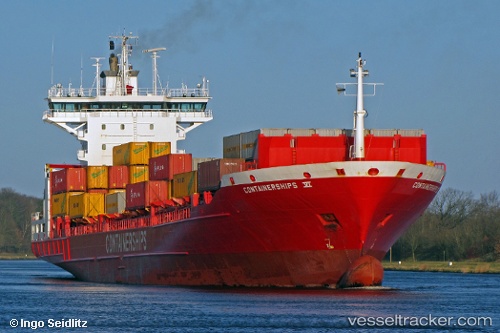 On March 8, 2020, at 11.35 a.m. the 'Containerships 6' allided with the middle wall of the New Southern Lock in Brunsbüttel upon the start of the Kiel Canal transit enroute from Rotterdam to Helsinki. The port side stern contacted the wall which suffered slight damage. The rubber strake of the vessel was sligthly dented. The cause of the allision was a sudden turn to the right of the vessel after it was caught by a strong wind gust. The ship was allowed to continue the voyage at 1 p.m. with an ETA at Helsinki as of March 10.

The "Containerships VI" which left Hamburg bound to Rotterdam on Aug 7, 2019, at 11.25 p.m., got in trouble in the Northsea on Aug 8 NNW of Borkum close to the R10 windfarm in 340º. The ship had suffered a broken cylinder of main engine near the Traffic Separation Scheme (TSS) off Borkum, in position 53 46 36N, 006 07 24E, at 07. 30 a.m. For some hours the ships was strolling along with 2-4 knots. At 5.30 p.m. the German emergeny tug "Nordic" reached the site. In the evening the two tugs "Waterstraat" and "Waterstroom" had connected to the vessel in vicinity 53° 33.00' N 006° 41.50' E. After the trouble was resolved, the tugs returned to Eemshaven short past midnight. The vessel entered Eemshaven, carried out repairs and started on its voyage. Once again it reported the same problem while at the TSS, returned to Eemshaven for more repairs and then finally started off on its voyage on Aug 10 at 6 p.m., bound to Helsinki, ETA Aug 13.