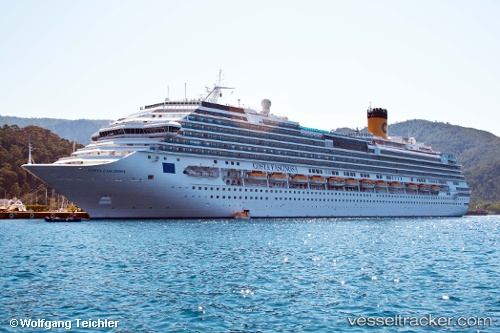 The 'Costa Fascinosa' has landed 27 more Italian crew members to return to their home country on May 7 and May 8 in Santos. The vessel arrived in port with 764 crew members on board on Mar 17 and has since disembarked 370 crew members.

About 230 crew members of the 'Costa Fascinosa', aboard which which 30 cases of Covid-19 and three deaths due to the disease were confirmed, disembarked on April 28 in the Port of Santos, Brazil, after completing their quarantine period. The ship arrived at the Brazilian port with a crew of 764 people, and currently 452 of them remained on board, while since March 17 there were no passengers on the ship. The number of those leaving may vary due to the logistics organized by the company. Those who disembark to be repatriated to their countries of origin will be transferred directly from the port to the airport. All the crew will undergo clinical examinations to verify if they have symptoms of Covid-19, in addition, new tests will be applied to diagnose the disease only if required by the destination country. The 'Costa Fascinosa' was quarantine between March 19 and April 26. The measure was suspended after confirming that there were no new cases of Covid-19 on board. During the period, 30 Covid-19 infections and three deaths were confirmed, the most recent being one that occurred on April 26 when the death of a 44-year-old crew member who was in the Intensive Care Unit was confirmed. On April 5, a group of 75 Brazilian crew members disembarked and six days later, 227 Filipino crew members were authorized to descend and head for their country on a chartered flight.

The quarantine of the 'Costa Faszinosa' has ended as of April 28. A total of 29 crew members were detected with Covid-19, ten of them were admitted to hospital at Santos, three of whom died. The over 400 crew members remaining on board were to be disembarked and repatriated to their home countries, which is a rather complex logistics operation, as they were to be taken by buses from Santos to the Guarulhos International Airport.