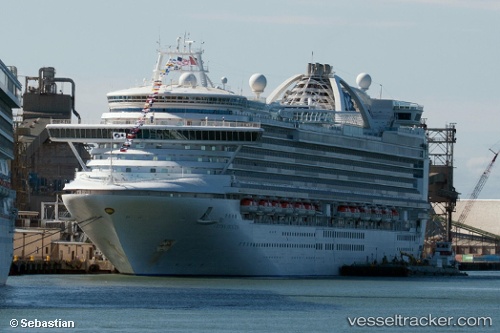 The 'Crown Princess' and the 'Island Princess' arrived in Cape Town on May 16, 2020. The 'Crown Princess' brought 2139 crew members, of which 30 were South African. The ship has used by the owners to repatriate crews stranded aboard their vessels and is due to proceed to other international ports in order to disembark other crew members. The vessel disembarked SA crew and SA medical team in Cape Town, who have been on-board the vessel for some time and required to be relieved by a fresh crew. All South African Crew disembarked and special permission was granted for a fresh medical team to embark to allow for the vessel to meet safe manning requirements before it can proceed to another port. The disembarked crew was subjected to the local COVID-19 regulations and will quarantine for 14 days before they can proceed to join their families. The vessel also took bunkers and supplies, before it sailed on May 16. The 'Island Princess' also arrived in Cape Town on the May 16 with 1416 crew, of which 62 were South African. The vessel will disembark the South African crew before leaving Cape Town.

The 'Crown Princess' suffered a technical issue on Jan 6, 2020. Due to the ongoing generator issue regarding the maximum cruising speed of the vessel. the itinerary was altered. Those on the current cruise which departed Fort Lauderdale, Florida. were already informed of itinerary changes from a letter sent out from the cruise line. The technical experts have been working to repair the generator, however, they have determined that the repairs will take longer than expected.

On Sep 25, 2019, at 10.10 a.m. the CROSS Etel coordinated the medical evacuation of a passenger from the "Crown Princess" 100 miles west of Île de Ré. The Caracal medical helicopter of the Air Force - based in Cazaux - hoisted the passenger, a 73 year old American, at 1 p.m. The patient was cared for at 2:50 p.m. by the services of the Bordeaux University Hospital.