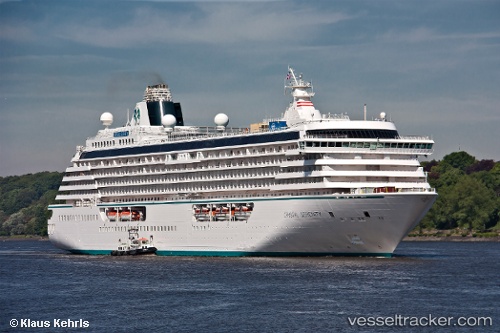 The Supreme Court Commercial Division in the Commonwealth of the Bahamas published the official notice of sale for the 'Crystal Serenity': Inspections of the vessel are ongoing with the bids to be in by June 7 accompanied by a 10 percent deposit. According to the notice, the winning bidder in the auction will be notified by Jun 14. They would then have an additional seven days to complete the acquisition and take possession of the vessel on an ?as is, where is? basis. The vessel remained at Freeport in the Bahamas since the cruise line ceased operations in Jan 2022 as part of the broader financial collapse of its parent company Genting Hong Kong. According to reports, the management of the vessel was handed over to V.Ships after it was arrested on behalf of the banks holding mortgages on the vessel and the creditors. The banks that hold the mortgages will decide the outcome of the auctions as they could move to take over the vessel through the auction or petition the court to reject the bids if they are deemed too low. The administrators in Florida overseeing the liquidation of the company reported recently that over 30,000 creditors filed claims. In addition, the fuel supplier that set off the collapse when they moved to arrest the vessel for unpaid bills, other suppliers, former crew members, passengers with reservations, and travel agents due commissions are believed to be among the claims. The Federal Maritime Commission has also set up a mechanism for passengers covered by the cruise line's bond to be reimbursed. The scrap value of the 'Crystal Serenity' was estimated to be around 22.2 million dollars, with a trading value of 87.4 million dollars.

The 'Crystal Serenity' after diverting to the Bahamas to avoid being detained in the USA, was arrested by the Bahamian authorities, on Feb 5. It has been seized after fleeing to the Bahamas to avoid U.S. warrants over unpaid fuel bills. The ship had cut short a scheduled expedition in late January and set course to Aruba, where it was not allowed to dock. After being diverted to Bimini, Bahamas, passengers were ferried to Fort Lauderdale, Florida. The cruise line's parent company, Genting Hong Kong, has been struggling with the effects of the pandemic on its shipping and cruise businesses. As of Feb 7, the ship was moored in position 26 31 26 N,078 48 29 W, about 1,4 nautical miles from the Freeport Anchorage.

The 'Crystal Serenity' was denied entry to Aruba on Jan 29, 2022, where she had been scheduled to disembark her passengers. On Jan 17, th ship got under way for a world-trotting voyage that would have covered more than 80 ports in four months. Because of the bankruptcy of Genting, this cruise had to be terminated shortly after departure, and Crystal arranged to offload all passengers in Aruba. The line said that it had had discussions with local authorities in Aruba about the vessel's finances and the possibility of any liens against it before docking. However, this was not enough to get permission to enter the port. The local officials informed on Jan 28 at 4:30 p.m. that the ship will not be permitted to dock in Aruba as scheduled. Instead, the 'Crystal Serenity' will follow the route taken by Crystal Symphony and head for Bimini. Passengers will disembark at that port and board a ferry to Fort Lauderdale.